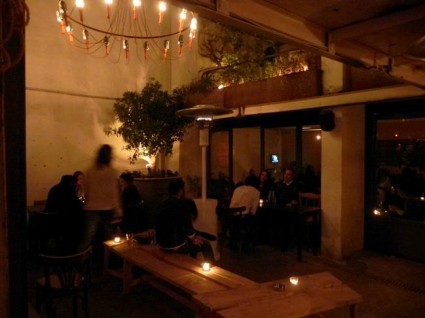 Read below what Dalal went through when she was complaining to Dictateur’s manager that someone is smoking inside. Regardless of whether Law 174 is right or not, the manager had no right to yell at her that way (Based on what she said) and should apologize.

Dictateur is a pub in Mar Mikhael.

Tonight was valentine’s night. My friends and i decided to go to “Dictateur”, a bar in Mar Mikhael. For the couples among us, this was a night to share a toast for “love” and for the single folks, an opportunity to have fun and maybe meet someone. The bar had a valentine’s special “speed-dating” game.
There was both a closed door and a “quasi” outdoor space (it’s a section with an open rooftop). We sat outside, where the game was taking place and I was watching my friends play. People were smoking where we were, which I thought was ok since there was no ceiling.
At some point, I spotted a woman smoking inside, a clear breach of law 174, which prohibits smoking in closed public spaces. At first, I didn’t react, thinking that the bartender would eventually tell her to stop. But he didn’t. A few minutes later, other men were also smoking.
It was not the first time i witnessed indoor smoking, and as in other times, i tried to play my part of a being a “good” citizen. I wrote a post on the Facebook group of law 174, and called 1735 to report the violation. Basics.
But, I wanted to give the manager the chance to justify what I had seen. I spotted a waiter and asked for his superior, told him I would like to complain about the smoking.
A few minutes later, a small man, in a white shirt and beige pants shows up, clearly wearing a mocking look on his face. He said he was the manager and that i had no right to complain because this was an outdoor space. I explained that the people i spotted were actually smoking inside and i had a picture of them ( which I actually do). He aggressively yelled at me accusing me of being ” anal”, he said he couldn’t care less if I complained or not, that I could leave if I wasn’t happy, and said something about ” stupid people like me”, who keep reporting violations about his bar to no avail. ” Go waste your time on something else,” he said yelling, ” i’m sick of people like you.”
At this point, i felt like i had to leave. It was the only way to protest my frustration. i felt helpless.
I told him it’s because of people like him that Lebanon will never be a better place, that change starts with small things, that the rule of law was the rule of law, whether it’s as simple as a smoking violation, or as grave as a crime.
Many people witnessed the argument.
But it doesn’t end here. I packed my things and was paying my share of the bill, when he showed up again. When he saw that i hadn’t left yet, he started shouting at me,” leave, leave, leave now, ten others will come,” making weird hand gestures.And when some of my friends tried to defend me, asking him to be polite, and to apologize for yelling at me in public, he verbally assaulted them as well, following me outside and calling me a “slut”.
Many people who witnessed what happened probably didn’t know why it happened.
I was told the owner of the bar sends his apologies on behalf of his manager, and that the police did come to check the place after i called them. But, that to me is not the problem. Dictateur is one among many other places breaching law 174. There is an endless number of restaurants violating the law with the blessing of the ministry of tourism. Many of us, my friends included, have been encouraged by the civil campaign for law 174 and the concerned ministries to report violations. Some got phone calls from restaurant and bar owners threatening them, right after calling 1735, and others, like me, got humiliated in public.
So my question is, who protects citizens like us, who are trying to protect the law? [Source]