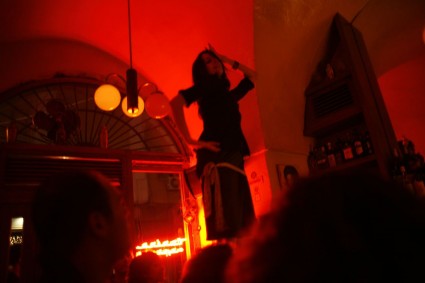 During my walk in Jbeil Souks the other day, i had a nice encounter. It took me time to recognize the guy, but then i asked him “Elie?” and he answered. That was probably the first time i speak to this guy while i am sober lol!

So who is this “Elie” ?
He was a bartender at Treesome pub in Gemmayze and i was a regular there two years ago. I usually don’t like cocktails but Elie’s cocktails were a killer, specially that one Absynth-Vodka drink we always ordered.

It didn’t have a strong taste but when you’ve had 5 or 6 of that drink, the rest of the night would be a story to tell, that is if you remember anything! Maybe i should share some of those stories or maybe i shouldn’t.

Anyway, it turns out he is launching his own pub in the next few weeks, but he didn’t tell me its name yet as he didn’t pick one, but it will be near The Electricity company in Gemmayze, most probably around “Behind the Green Door”.

Guess i will pay him a visit once it’s open.