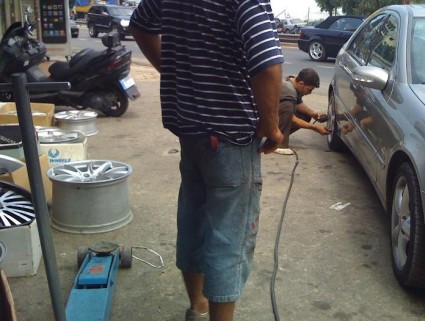 I, like most guys, love cars and driving and all, but i don’t know much about its mechanics nor do i pretend to know, unlike most Lebanese guys. Every time i have a certain problem with my car, i get like 20 different answers and half of them would include “Chou fahhamo el mechanicien! ana ba3rif”.

To make things worse, most mechanics in Lebanon are liars and want to rip you off somehow and companies are no better. You go to change your brakes and end up changing your tyres, cylinders and maybe chassis who knows??

On Tuesday, i had to remove a nail from one of my tyres. I stopped at a tyre place and once the guy was done, i asked him to check the car tyres pressure and make sure they are as recommended.

To find out what your car’s tyre pressure should be, consult the manufacturers tyre placard usually found inside the driver’s door sill, glove box, fuel filler cap or under the bonnet. The placard also displays the manufacturers recommended tyre sizes. [Bridgestone]

He answers me that i don’t need to check what the tyre manufacturer says as it’s common knowledge i should keep them as 30/30. I insisted that he does them as written down and he felt offended of course. I didn’t tip him of course because he was an ass.

After i was done, i went to my mechanic to check why my car is making squeaking sounds when turning the wheel or simply when driving sometimes. He answers me that my brakes are not good quality and should be changed.

One minor detail he forgot is that he was the one who changed my brakes five weeks ago!!!

After having stated that “minor” detail, he tells me he needs to take a closer look at it and after few minutes, tells me that it’s just a minor issue that will pass once i change my brakes. I just let go and went back home because unfortunatelly, he is better than most mechanics i’ve been to or been advised to go to and looking for a good mechanic in Lebanon is cumbersome and tiring.

Thank God my car doesn’t cause me that many problems.