This period of the year is also known as the lent period which leads up to Easter. Lebanese Christians majorily refrain from consuming meat or chicken for 40 days which boosts the sales of Falafel, fish burgers etc …

During the weekend i was told about this awesome Falafel place in Sin el Fil called Falafel Abou el Zouz, so i went yesterday around 1 pm to try it. It was hard to find and far from the main road and was called “Joseph Falafel” and not “Abou el Zouz“, so i sounded a bit dumb asking people around about Aboul Zouz falafel. 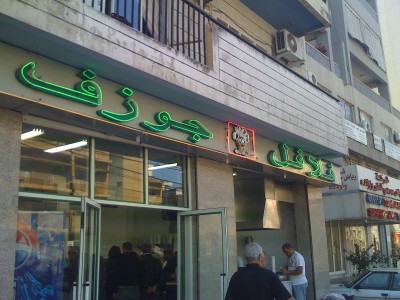 Nevertheless, once i finally got there, i saw large crowds waiting in line. I don’t believe i’ve ever seen so many people wanting to eat Falafel !!

It took me 10 minutes to place my order then another hour before i got my two-dozen of Falafel to go. ( for my family and my gf not just for me of course 😛 )

Three guys were preparing the Falafel, another was wrapping up the sandwiches and a fifth guy preparing dozens. He wrapped more than 100 sandwiches, and i am not exaggerating, while i was waiting for my order to be done. The picture below speaks for itself. 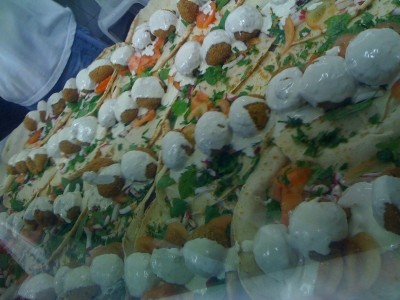 Was it worth the wait ?
I am not a big Falafel fan but i must say they did taste better than any other i had before. It is definitly worth it but maybe not during Lent when there is less demand for Falafel.

On a final note, it turns out the guy “Joseph” has also a Shawarma place, and i doubt Abou el Zouz would substitute his Shawarma guy for a Shawarmanator. This turtle-slow piece of machine will cause riots in Sin el Fil lol !