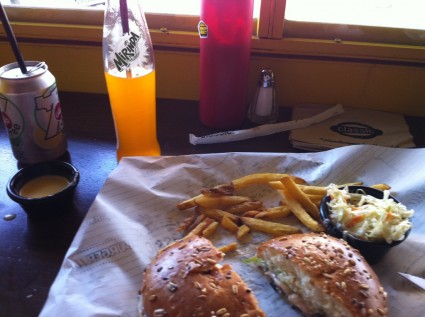 I was craving a burger all week and decided to forget my diet on Saturday and have a burger at Classic Burger Joint in Jal el Dib.

This post is not a review of the place but a funny incident that we had and that would only happen in Lebanon.

We came in and sat down and ordered our burgers. Some 20 minutes later, while we were eating, electricity went off and UPSes start beeping. The place was closed, AC and ventilation were off, and the grill was still on.

CBJ’s staff were expecting the famous “moteur” to get the electricity back on but it did not happen and we had to wait some 20 minutes until it came back. Meanwhile, the place was filled with smoke from the grill and even though there were nice smells, we were almost suffocating.

After opening few windows and making some calls, electricity went finally back on but the good thing is that the management did not charge anyone for their meals because of that incident.

Considering how bad the customer service is generally in Lebanon, CBJ management’s gesture was excellent noting that I insisted that this is Lebanon and such things happen but they wouldn’t let me pay.

PS: If you notice in the picture above, they gave me the archaic Mirinda bottle when I asked for one while they had cans for the seven up. I didn’t even know those Mirinda bottles still existed.