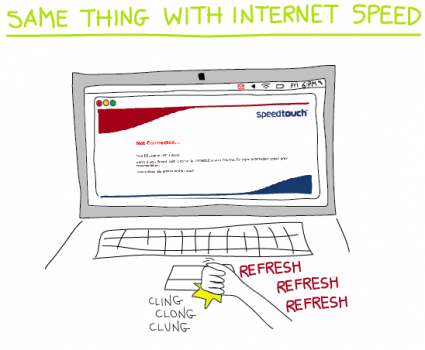 A submarine cable which will give Internet service providers the capacity they need to supply high-speed Internet services, including 3G, was put into action Monday, after months of waiting. â€œThe tap was closed, and now itâ€™s open,â€ Antoine Boustany, an adviser to Telecoms Minister Nicolas Sehnawi said Tuesday. [DailyStar]

So we should be hoping for a faster and cheaper internet soon.

Ever wondered why the internet is that expensive?

Unlike government-owned Alfa and MTC, ISPs currently pay some $3,000 for a line which costs the government $100 to supply, and Tarabay said that this is prohibitive to ISPs being able to provide affordable fast Internet to users.

â€œAt the moment itâ€™s as if they were inviting you to buy property in Downtown [Beirut],â€ he said. â€œThereâ€™s a lot of land, but nobody can afford it.â€

We should call it a national holiday the day we get a decent internet connection in this country. Nevertheless, I am not buying this story and won’t believe a word they say until I have a proper connection at home.

See Also:Seheili is the ghetto
Posted By Najib
Categories LEBANON,NEWS,TECHNOLOGY