I had posted two days ago an update on the steeple and afterwards saw this nice report by LBCI on the controversy caused by the height of the clock tower when compared to Al Amine’s mosque minarets.

To be honest, those who are upset about the steeple’s height or are arguing on whether it should be as high as the minaret or not are showing a lot of short sightedness to say the least. We have tons of religious monuments in Beirut yet none of them is prepared to properly welcome tourists and this is wrong.

I’ve been to 4 or 5 European Capitals so far in my life and the old Churches and Cathedrals are key attractions here with kiosks, cafes and restaurants all around them, not Army Humvees and tanks. 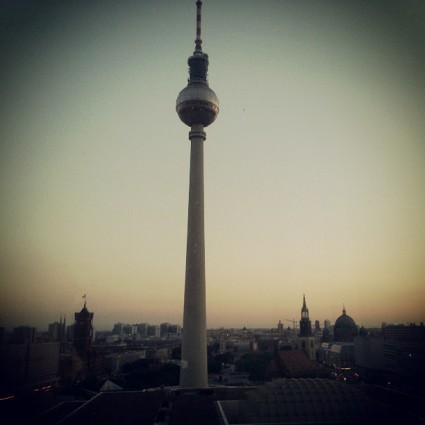 The highest point in Berlin, the Fernsehturm or TV-Tower as seen from my hotel room – [@LeNajib]

I am currently in Berlin and one of the main attractions of the city is the TV-Tower, also known as the Fernsehturm, which attracts almost 1.2 million visitors every year. I waited on a Thursday for almost 3 hours for my turn to come, and then went up in an elevator almost 200 meters (in barely 15 seconds) and enjoyed a 360 degree view of Berlin.

I am not trying to compare both sites, but if someone had thought of making the steeple even higher and provided tourists with a chance to enjoy a 360 degree view of Beirut, instead of wasting time and money on making sure it doesn’t surpass the minaret’s height, then we would have had a point of reference for tourists in Beirut and a popular touristic site as well for foreigners and Lebanese. 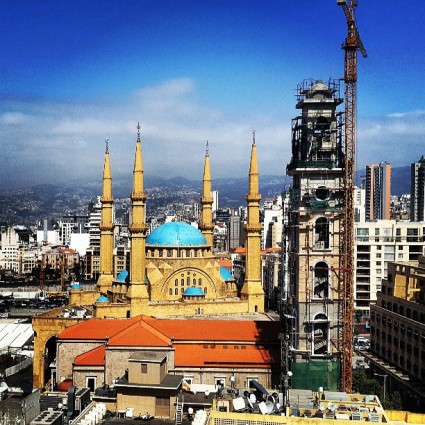