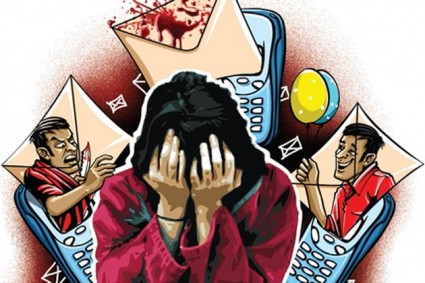 I’ve been hearing a lot lately about girls getting harassed “textually” by unknown men either through WhatsApp or other messaging service. Only last week, 2 friends of mine showed me messages they are getting from these random guys, sometimes accompanied with naked pictures or love songs. One of them even proposed to marry her and sent her his own picture (even though she never answered him back and always ignored his calls).

I know that the best way is to just ignore these people but sometimes it can go on for weeks and the same person could be using several numbers which is why I think there should be an easy way to report such harassment acts and catch the people doing this. It’s not funny when a married woman gets a naked picture of another man on her phone or gets offered money in return for sex from a total stranger. The annoying part is that once that person knows your number, there are many ways he can reach you.

Having said that, and based on what I’ve been told, the legal way to approach a harassment is by either going to the nearest Office of Public Prosecutions and filing a complaint or talking to a lawyer. Another “illegal” way is to have someone call the guy and pretend they are from the ISF Information Branch or Army intelligence Officers but I wouldn’t recommend it. In fact, the reason I know about this illegal method is because someone tried to do that with a well-connected relative of mine and ended up getting caught along with the guy he hired. Of course the girl can always call the guy or have her brother or boyfriend or father call him and warn him but that’s not the proper way to deal with it.

Back to the main topic, I think there should be a hotline or website shared by the police and Telecom ministry dedicated to reporting harassing phone calls and texts. That way, people who are getting harassed will avoid the hassle to hire a lawyer or going to the Office of Public Prosecutions for a small yet serious matter.

All they would have to do on the website for example is to submit a form accompanied with screenshots and the people in charge of this website or hotline would double check the information and then block the line or trace it to its owner and arrest him. If they report it via the hotline, the number would get a warning call.

I will submit this request to Minister Sehnaoui since he’s the current Telecom Minister and other concerned parties to see if there’s anything they can do about it. 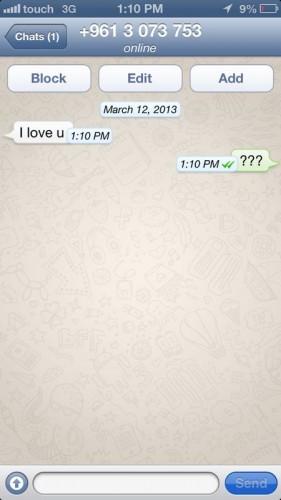 Here’s a screenshot I got from a friend who got this message from some unknown number. The conversation dragged a bit before she blocked him.