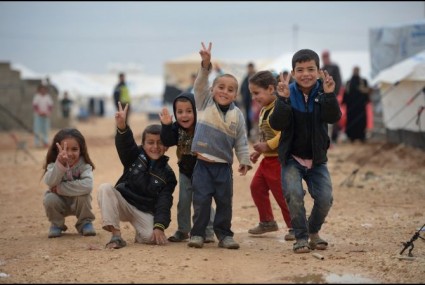 Children pose for a picture in the Za’atari refugee camp in Jordan. PHOTO BY: Jeff J Mitchell

According to a World Bank report, Syria’s conflict will cost Lebanon $7.5 billion in cumulative economic losses by the end of next year. This number comes as no surprise as businesses are suffering, restaurants and hotels are closing down, tourists are not coming while refugees are flooding the country and unemployment is on the rise.

As far as Syrian Refugees are concerned:
– The UN says we have 755,00 refugees while the World Bank estimates their number at 914,000 (Excluding the Syrians who were in Lebanon before the crisis).
– The number is expected to rise to 1.3 million by January and 1.6 million by end of 2014, forming almost 37% of the country’s population.
– 150,000 Syrian children will be expected to register in schools next year, a number that constitutes more than half the number of public school students in Lebanon.
– 40% of primary health care visits were for Syrian refugees last December.

As far as Lebanese and Tourism in Lebanon are concerned:
– Unemployment is expected to double and reach 20 percent.
– Another 170,000 Lebanese (Added to the 1 million Lebanese already classified as poor – living on less than $4 a day) will be pushed into poverty due to the crisis.
– Nbr of visitor arrivals dropped by 43% in the first seven months of 2013 when compared to the same period in 2010.
– Occupancy rates in most of the luxury hotels in Beirut is around 30%.

All numbers were taken from the [Reuters article] and [Executive-Magazine article].