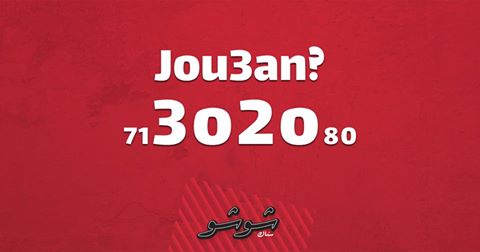 Snack Chouchou has recently opened in Jounieh and the above is their idea of promoting their delivery service. Their delivery number is 71/302080 so they decided to highlight the 3020 in big letters as “3o2o”.

I will be honest, it took me a second to figure out what they’re saying because I’ve never used that term. I’m familiar with “Mloto”, “Kello” and other inappropriate terms but I’ve never used 3o2o. If anything, I’ve used it to indicate someone drinking a lot (3e2 may, 3e2o vodka etc ..)

Having said that, I’m not really sure this is the right way to attract costumers. If this is meant to be a joke, it’s vulgar and wrong. There are other ways to use street slang like Sandwich w Noss is brilliantly doing but this is a bit too much in my opinion. In all cases, I’m definitely not ordering food from that place 😛