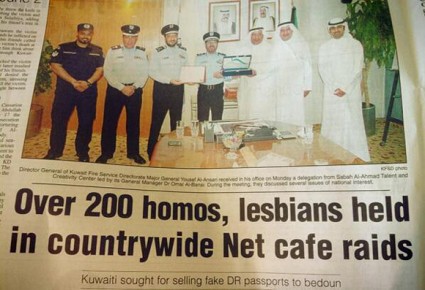 I read today that “Kuwaiti health officials are looking at the possibility of enacting “stricter” clinical screening of foreigners trying to enter the country that will help them “detect gays.” [Source]

Jokes aside, I was reading an article on that matter on the “Atlantic Wire” and I found this:

Kuwait isn’t even a gay hotspot. Neither is the Middle East, where gay is banned because of conservative Islam — Dubai, considered one of the more progressive places there, is still pretty intolerant of homosexuality. Berlin and San Francisco these places are not, and people going to Kuwait or Dubai aren’t doing so because it’s some wonderful Shangri-La for gay people (like Tel-Aviv) or some open gay sex paradise (like Pakistan). And it all makes you wonder if Mindkar is just banning people who, by in large, don’t even have any interest in going.

I always thought Beirut was considered the most gay-friendly city in the Middle East.