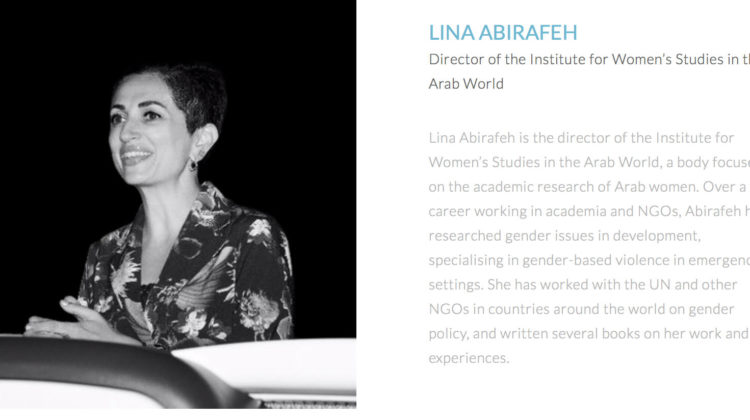 Lebanese-Palestinian Lina Rafeh, director of the Institute for Women’s Studies in the Arab World (IWSAW) at the Lebanese American University, was included on the world’s 100 Most Influential People in Gender Policy in 2018, a report published by Apolitical, an international platform for governments that gathers and produces research on topics relevant to civil servants.

The list “honors and celebrates women and men making the world more equitable, whether they exert their influence through policymaking, research, advocacy or however else”, and Lina was featured among the likes of Canadian PM Justin Trudeau, Malala Yousafzai, Melinda Gates and several others. [Full Report]

Speaking to the DailyStar about gender equality in Lebanon, Rafeh said:

“Lebanon has a very interesting identity crisis,” Abirafeh said. “The masses consider it to be quite liberal and make comparisons to other countries in order to justify that. “But I don’t think that’s effective. I think that’s just a reason for inaction and complacency.”

Abirafeh joined IWSAW in 2015 after having spent much of her previous career working on gender issues in development and humanitarian settings. The IWSAW was founded in 1973, making it the first such institute in the Arab world. The institute works at the intersection of academia and activism by advancing women’s empowerment and gender equality through education, research, development programs and outreach at the national, regional and international levels.