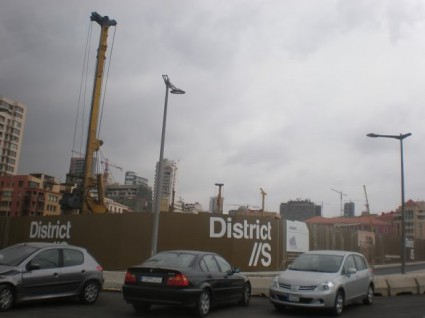 I can’t believe they actually attacked him for taking pictures! WTF?

I saw a hole in the fence and tried to take a few shots. Nothing was visible but bulldozers. A man with a walkie talkie saw me and yelled that photos were prohibited. He sent me to the main door. There two men stood, one with greased hair, a white shirt and a metal cap visible in his mouth.

I asked if I could see the site and he refused. “This is private property, no pictures.”

“But this is our history. How can it be private property? There are ancient ruins there.”

He apologized and repeated that I could not access the site.

Another man appeared, easily the tallest on site with light, almost pale skin. He was built like a bouncer.

“You see this fence,” he pointed behind him. “This is private property.”

“You want history? Go look over there.” He pointed to the downtown area.

“Do you want to have coffee,” he asked, with a smile.

“Sure, but I want to see the ruins first.”

“There are no ruins!” he said, repeatedly. “There’s nothing to see here.”

The site door opened behind him and I tried to get look. “Close the door,” he shouted.

“What’s the secret,” I said. “Are you hiding something?”

One of the men standing behind him was radioing back-up. Soon “the boss” showed up.

He was wearing suit pants and a silky button shirt, slightly opened–gray or grayish hair. Clearly not the type to get his hands dirty.

“There is nothing here,” he said parroting the previous response.

“If there is nothing, than why won’t you let me see it,” I asked.

“Fine, you want to see? Look,” he pointed at the open doorway.

He ushered me inside and stood in front of me. All I could see was a big pile of dirt and rocks to my right. And in the distance, to the far left, I could see a foundation being laid.

“You see there is nothing,” the boss said.

“What about over here,” I said, pointing to the middle area that was not visible from our standpoint.

“Sure,” the boss nodded, hesitantly.

As I walked down the small dirt hill, an ancient rock wall structure appeared before me. The rocks were rectangular, dark, almost grayish from what I can remember in that moment. They were about 1-2 feet in length and carefully fitted together. I glimpsed a small team of men moving them out of place using a small crane. [Full Story]

See Also:A Not So Happy Lebanese Army Day After All
Posted By Najib
Categories INFORMATION,LEBANON