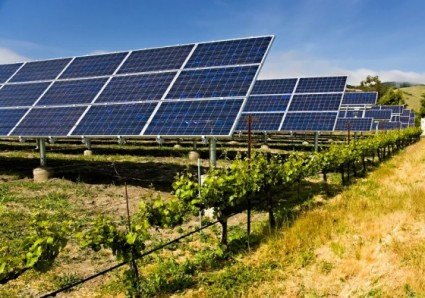 Renewable energies are a must in Lebanon and the energy ministry should be the first to encourage people to use them if they can afford to. I hope more people will follow Fadi’s example and more banks and corporations (not just the central bank) will give out green loans or fund sustainable initiatives like Fadi’s.

When Fadi Jamaleddine decided to install a solar array on his farm in Lebanon’s Bekaa Valley, he wasn’t thinking of the environment or global warming, he told The Daily Star.

He was simply tired of spending $50,000 a year on electricity for what is a hobby organic farm for the corporate lawyer. And while he could afford the upfront $76,000 to pay for an off-grid solar-powered irrigation system, he took out a green loan just to demonstrate to others that it is possible to do so.

His farm is the first in the Bekaa Valley to irrigate its water-intensive organic crops, such as tomatoes, grapes, and apples, with a solar-powered system, though Ardahalin told the paper that he has recently installed a second one – that Jamaleddine is leading the way.

And whilst it will take some time for the system to pay for itself, the hobby farmer has already established an energy-sharing scheme that allows him to sell his excess energy to neighbors who experience crippling power outages.

Albeit motivated by making money for himself, he has also become an accidental do-gooder.

As for his own farm, where goats, sheep and fowl also require a consistent water supply, it is quickly becoming self-sufficient despite suspicion from locals that there’s no such thing as free energy.

“Many people are skeptical of alternative energy,” Ardahalian told The Daily Star. “They think it’s a gimmick, that you can’t get electricity for free. That’s why it’s important this system succeeds.” [Link]