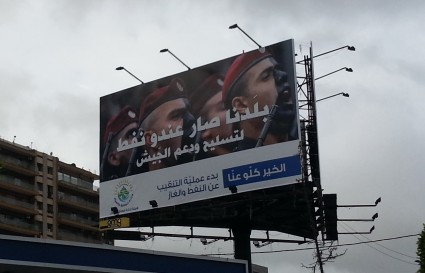 A friend was telling me that she spotted new ads for the Lebanese Ministry of Energy and Water yesterday, one showing a metro/train in the background and another ad showing Lebanese Army men with slogans saying:

To begin with, it is still very early to talk about gaining any profits from the exploration of oil and gas as we are still in the per-qualifying round and the first exploration and production agreements are scheduled to be signed in February 2014.

Second and more importantly, it is not the lack of money that is preventing our government from funding the Lebanese Army and I think we all know that by now. Added to that, I was hoping that we’d be able to live in peace with the neighbors (the ones we acknowledge and the one we don’t) and focus on improving the country and making life better for the Lebanese after these finds and I believe this is what we should put our hopes on (Look at the Qatari Model for example).

Last but not least, I saw the ad with the train (or Metro) in the background but I couldn’t take a shot of it. I don’t know how feasible this project is and I will be waiting to see if the minister in question has any future plans for that specially with the lack of urban planning or any planning in this country.

All in all, it’s very nice to dream and let people dream of a wealthy country with a solid infrastructure, prosperous economy and a strong army but at the moment, most Lebanese are dreaming of leaving the country and struggling to have a lira in their pockets at the end of the month. So it wouldn’t hurt if all officials got down to Earth for a second and reached out to the people’s real needs instead of living in lalaland.