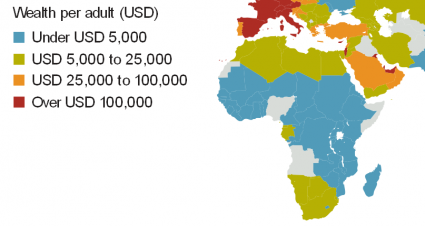 Out of 141 countries, the U.S. has the 4th-highest degree of wealth inequality in the world, trailing only Russia, Ukraine, and Lebanon.

Yet the financial industry keeps creating new wealth for its millionaires. According to the authors of theGlobal Wealth Report, the world’s wealth has doubled in ten years, from $113 trillion to $223 trillion, and is expected to reach $330 trillion by 2017. [Alternet.org]

However both the World Bank Gini and CIA Gini numbers are missing for Lebanon and I couldn’t find a reliable source for the number provided even though it is linked back to the Credit Suisse report.

Nevertheless, with almost 30% of poverty in Lebanon, add to that high levels of corruption in the political body and major disparities in the poverty rates and income distribution, I wouldn’t be surprised if we were placed in the top 15 or 20 countries.

If anyone has a more reliable source to back these rankings, please do share.

What is the GINI coefficient?

According to the World Bank, the GINI coefficient “measures the extent to which the distribution of income or consumption expenditure among individuals households within an economy deviates from a perfectly equal distribution.” Therefore it is used as an indication of income inequality within countries. Practically, it measures the area between the Lorenz curve, a standard indicator of the distribution of income within a community, and a hypothetical line of absolute equality, expressed as a percentage of the maximum area under the line. In this index, 0 represents perfect equality, while 100 perfect inequality.