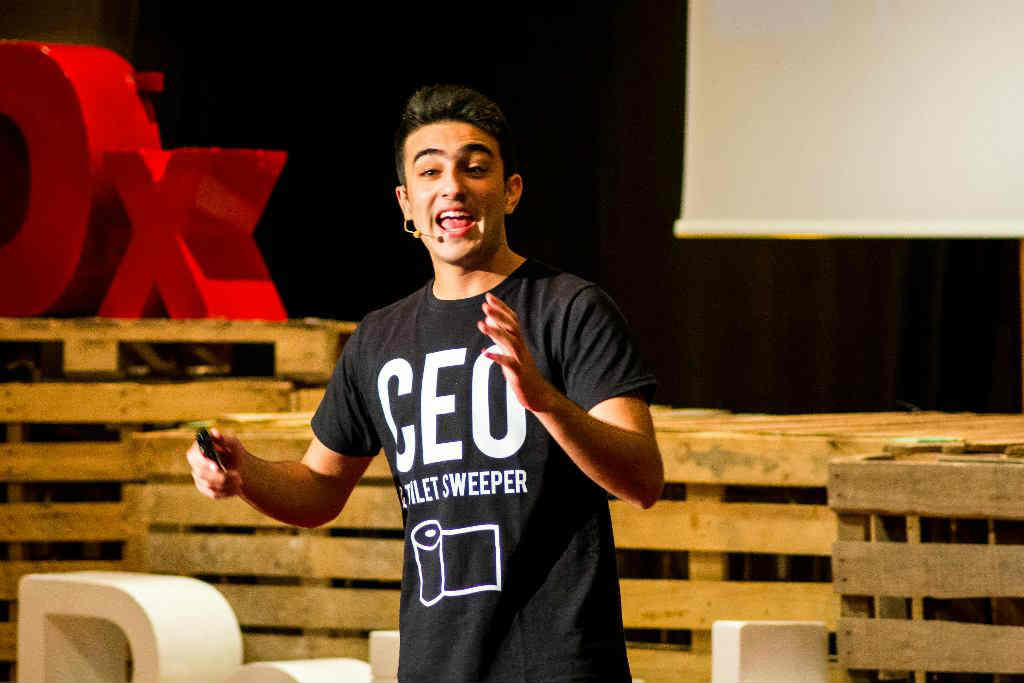 I want that shirt – Picture from TEDxBeirut

Few days ago, the Thiel Foundation announced its next class of 20 fast-tracked college dropouts to be the next Mark Zuckerberg or Bill Gates, and Lebanese Jihad Kawas is one of them. Kawas will be receiving $100,000 but more importantly a wealth of mentorship during the two-year program provided he drops out of college during this period. Jihad, who’s only 17, is the founder of Saily, a new and evolving startup that consists of an online marketplace aiming to make selling goods as quick and easy as possible for the public. Kawas attended the Worldwide Developer’s Conference at the Moscone Center in San Francisco where he took a selfie with Apple’s CEO Tim Cook who gave him the thumbs up for his idea with the advice “to just keep working on it.

What is the Thiel Foundation and why is this a big deal?

The Thiel Fellowship was created by Peter Thiel, who’s an American entrepreneur, venture capitalist. He co-founded PayPayl and was the first outside investor in Facebook. He’s also the “president of Clarium Capital, a global macro hedge fund with $700 million in assets under management; a managing partner in Founders Fund, a venture capital fund with $2 billion in assets under management”. Thiel has a net worth of US$2.2 billion as of Jan.2015 and is ranked 12th on the Forbes Midas list.

Thiel announced the fellowship back in 2010 and has been attracting more and more applicants every year, with over 2,800 people applying for the fifth class of fellows that was announced few days ago. The idea from the program is not to question education and encourage students to drop out of college, but to invest in a group of young, talented and passionate individuals and help them fulfill their dreams, invest in their ideas and come up with new companies and concepts. Entrepreneurship has become a career path whether we like it or not, and Thiel argues that investing in an idea at a young age can prove to be more beneficial than spending years pursuing higher education.

It’s definitely an interesting point of view and the fact that there are so many self-made billionaires that never made it to college makes it even more appealing to the younger generations. Needless to say, you need to have a new or brilliant idea to consider dropping out of college and potentially ruining your career and becoming unemployed. More importantly, you need to invest in this idea and consistently work on improving it to make it happen one day and that’s where initiatives like the Thiel Fellowship may prove helpful.

Mike Butcher from Techcrunch stated back in April that “Beirut is rapidly shaping up to be a powerhouse for startups in the Middle East”, and that “Lebanon is uniquely posed to generate startups which aim both at the Arab world and the wider world at large”, and Jihad Kawas is one of many young Lebanese entrepreneurs proving him right. He may start his own company after 2 years, or maybe consider selling his idea or even going back to college; what’s important is that he will be gaining a unique experience and making decisions on his own.

Best of luck to you Jihad!