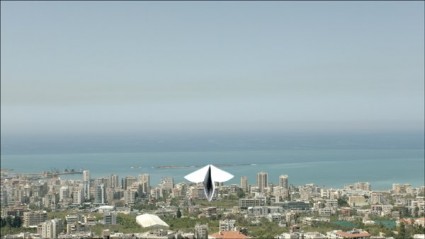 That’s the first time I hear about this story. I hope we will see the movie in Lebanese theaters.

During the Israeli invasion of southern Lebanon in 1982, a rumor circulated throughout Akram Zaatari’s hometown, Saida. It was said that an Israeli fighter pilot was ordered to bomb a school there but refused and instead dumped his bombs into the sea.

Mr. Zaatari, 47, an artist who now lives in Beirut, first heard this story when he was 16 years old. His father was the founder of the school, which was eventually bombed by another pilot and severely damaged.

Over the years, Mr. Zaatari heard versions of the same tale, with varying explanations for the actions of the pilot, and he came to regard it as a legend of sorts. He once referred to the story during a lecture that was transcribed and published in a book, and came to discover that it was no rumor and that the pilot did exist. His name was Hagai Tamir.

When Mr. Zaatari was selected to represent Lebanon at the 55th Venice Biennale, which runs until Nov. 24, he chose to focus on this Israeli pilot’s act of conscientious objection with a quiet, evocative, film, “Letter to a Refusing Pilot.” [NYTimes]