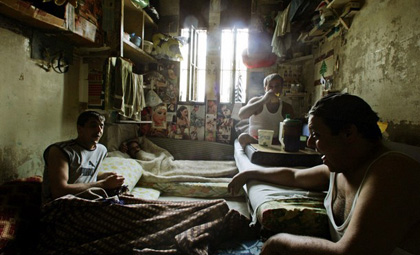 Can anyone explain to me what are Roumieh inmates complaining about? Because all what I’ve read so far is that the reason that triggered all this mess was that they were deprived of their cell phones?

I still can’t believe they were allowed to have phones in the first place.

Add to that, most of them are among Lebanon’s most wanted criminals, either wanted for murder, terrorism, theft, drug trafficking etc …

A mother was on TV yesterday arguing on what’s wrong if her boy sells a bit of drugs since the government is doing worse things. What sort of nonsense is this?

Another 50 year old woman burned herself (WTF?!) asking to release her son from Roumieh. [Link]

Looking at the inside report that NowLebanon published, they are very well treated compared to foreign prisoners and given the crimes they’ve committed.

Last but not least, who’s brilliant idea is it to ignite fires inside the prison cells as a sign of protest?