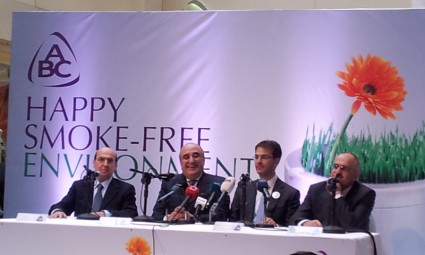 ABC’s smoke-free environment campaign is definitely a step in the right direction, even though restaurants and cafes will only have to abide by this non-smoking initiative on Mondays only. Some say it’s not enough and smoking should be banned all week long but I think it’s unfair:

1- Because smokers should be allowed to smoke in designated places and I honestly don’t see how Arguile places in ABC are going to manage that, such as Leila and Cafe Blanc (Assuming arguile is also considered as smoking).
2- Because ABC is not ready to endure major financial losses and be the only mall to ban smoking.

Among those present at the official launch of the happy smoke-free campaign at ABC Achrafieh were Minister of Public Health Mr. Ali Hassan Khalil and Minister of Tourim Mr.Fadi Abboud. I was glad to hear Minister Abboud is planning to increase the price of the cigarette pack, but his statement on the non-smoking law in the airport was a complete joke.

He also reminded people how they believed it would not be possible to implement a non-smoking law in the airport and they were proven wrong. [Source]

In fact, the most difficult task awaiting ABC at the moment is making sure no one is smoking and being able to kick out those who refuse to turn off their cigarettes, because last time I checked, no one cared about the smoking ban at the airport.