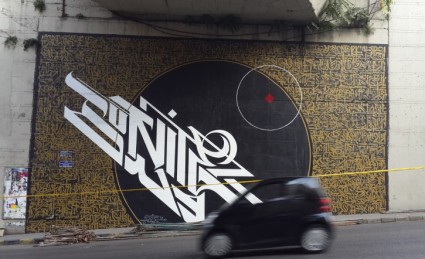 I spotted this new graffiti on the way up to Sassine Square in Achrafieh. It looks like Yazan’s work but I can’t really tell what it says.

Update2: Here’s an email I got from the director of the Project Graff Me Lebanon

The photo you posted on your blog is done by ZEPHA, its one of the walls part of our project we realized last week, there is also another piece by italian artist Zeus under the cola bridge going towards salim slem,

Other works in this school include lebanese artists: Phat2, Eps, Zed, Kabrit, Bros Crew, Moe and many others…

We did workshops too for the students in this school,

Soon we will have another big wall made by Lebanese Artist, location to be revealed probably in a couple of weeks.

Update3: Here’s what the red dot means as per the artist

“When we think of a certain theory of convenience, in which is distributed a center and a periphery, we ask ourselves, deep inside, the work of Zepha (Vincent Abadie Hafez) wont be consistent of reversing usual values: From the perimeter, do the center, from the line, mark the dot (this one dot is like a starting point, originally of all paintings) kind of negativity of the communal hierarchy accepted, concluding to a deletion of this same hierarchy: Everywhere the center, no where the periphery, hypothesis of a point abounding, scored and emerging the multitude.
Dot=Beginning of everything
Red=Blood=life= heart… ?

Each may have his explanation, why explain, is there only one explanation? each should feel the piece, look at it through his own personal story.”