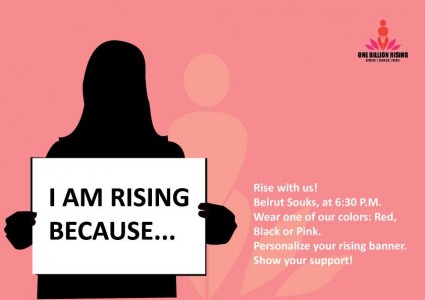 ONE BILLION RISING began as a call to action based on the staggering statistic that 1 in 3 women on the planet will be beaten or raped during her lifetime. With the world population at 7 billion, this adds up to more than ONE BILLION WOMEN AND GIRLS. On February 14, 2013, V-Day’s 15th anniversary, women and men will join activists, writers, thinkers, celebrities across the world as they express their outrage, demand change, strike, dance, and RISE in defiance of the injustices women suffer, demanding an end at last to violence against women.

The One Billion Rising Lebanon team is taking part in this day as they are stepping out and striking, dancing and rising in Beirut Souks at 6:30pm.

1• OPENING: V-Monologue -excerpts from Project Unbreakable- to be read and emoted in English/Arabic by playwright/director Lina Khoury

2• The Dance: “Break the Chain” (Smart mob)
This is the One Billion Rising anthem and dance for about 4.5 minutes. We as a group of women and men will dance, inviting the public to join in rising and dancing. A team of men and women will hold One Billion Rising banners.

3• CLOSING: Positive Message (excerpts from Eve Ensler’s poem, Rising) – to be read by Junaline Bañez-Moussi, one of the organizers of the OBR Lebanon campaign.

At closing, we will ask the public to write on a Vision Wall (In Beirut Souks) on what 1 Billion Women Deserve!

I will post the video as soon as it’s available online.

Learn more about it [Here] and join if you can!