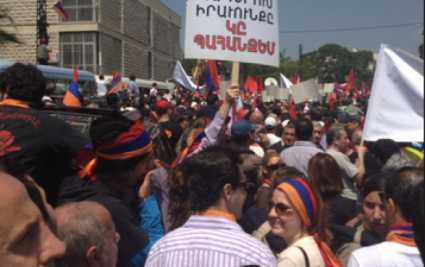 Tens of thousands of Armenian-Lebanese demonstrated outside the Turkish embassy in Rabieh on Tuesday and called on Turkey to recognize the Armenian genocide. Today marks the 97th anniversary of the beginning of the genocide. The rally started after a rememberance Mass at the Armenian Orthodox Catholicosate in Antelias. Protesters chanted anti-Turkish slogans and several Turkish flags were burnt. [Source]

Added to that, all Lebanese and not just the Lebanese-Armenians community should demand that this genocide be recognized as the Ottoman empire did not spare us from massacres back in 1915. In fact, it was the commander in chief of the Turkish forces in Syria, Jamal Pasha, who militarily occupied Lebanon and forced a blockage of the entire eastern Mediterranean coast to prevent supplies from reaching his enemies and indirectly causing thousands of deaths from widespread famine and plagues. Lebanon suffered as much as, or more than, any other Ottoman province. [Wiki]

What happened in Lebanon is only a fraction of what the Armenian people had to go through.