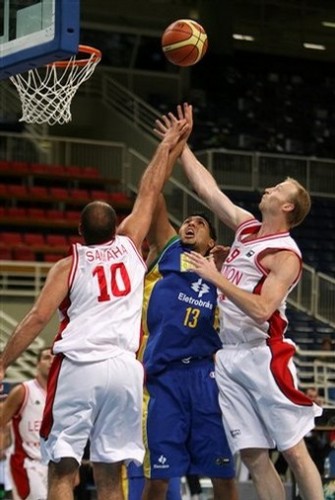 Whomever said that Lebanese basketball died after President Choueiri,(R.I.P) stopped sponsoring teams was not wrong at all!

The Lebanese Basketball Federation is a complete joke and has proudly proven so throughout the years. I just saw their selection for the 2010 FIBA World Championship in Turkey and Roy Samaha was excluded from the squad. He also barely played in the Stankovic cup which Lebanon kind of struggled to win despite the absence of any major team.

I am not sure what this new coach is thinking, but the teams we are facing in Turkey require big guys and he somehow managed to exclude the biggest guy on the team!

Now one might argue that he hasn’t been showing his best game lately, though he averaged almost 10 points and 10 rebounds in the 2009 season, but to be replaced by Ghaleb Rida and Ali Kanaan is quite outrageous. Rida is almost retired and Kanaan is everything but a center!

Funnily enough, Lebanese scouts are busy looking for old retired Lebanese players outside Lebanon (Matt Frangieh for example) or foreign retired players to naturalize (Jackson Froman) instead of recruiting new Lebanese talents. The last real team we had goes back to Elie Mechantaf’s days. Now all we got are a bunch of individuals trying to show off, on top of them Fadi el Khatib who knows nothing about team work.

Let’s just hope we don’t get humiliated too much in Turkey and this stupid-ass coach they got is fired soon enough.

Here’s the schedule for the 2010 FIBA championship.