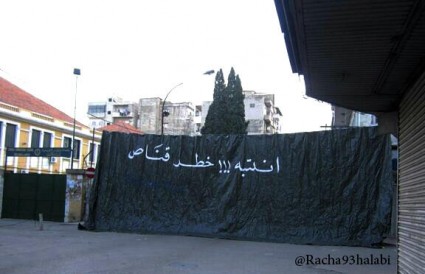 A nice read with a lot of details on Tripoli’s fighters and the clashes occurring there.

In Lebanon’s northern city of Tripoli, sectarian warfare has become entrenched as a way of life. Every few weeks, armed clashes erupt between Sunni Muslims in the Bab al-Tabbaneh neighborhood and Alawites on the hilltop of Jabal Mohsen. With the absence of a real political initiative to contain the crisis, clashes are expected to continue as the conflict in Syria worsens.

Different political parties are believed to be investing in the rifts so as to steer events towards a course that would better serve their goals. Syria and Hezbollah are backing the Alawite fighters while Sunni politicians and Gulf sources are backing the Sunnis to mobilize their support. As fighters on both sides become pawns in a larger regional game, former Prime Minister Najib Miqati is believed to be extending an arm to the Sunni street seen as supporters of the revolution.

Since the outbreak of hostilities in Syria between the Assad regime and opposition forces, the war has spilled over into Lebanon. Sunnis in the Bab al-Tabbaneh neighborhood support the rebels trying to oust Syrian President Bashar al-Assad while the Alawites of Jabal Mohsen stand loyally by him. It is fitting that the street which forms one of the major frontlines between both is called Syria Street.

Six Months After Switching from Normal Cigarettes to the ...

It’s Time for Round 3 of The #FitB4Christmas Challenge