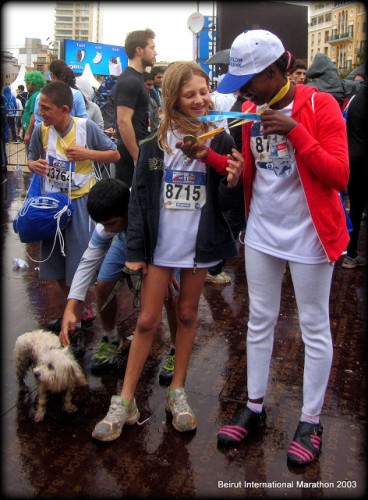 Picture from Sietske in Beirut

Like I said on many occasions, I always look forward to Sietske’s posts, not just for the awesome pictures, but also for the exciting stories and adventures that follow and the story of her kick-ass housekeeper is the coolest story I’ve read on her blog so far.

Back in November 2012, Sietske went to participate in the Marathon with her two children and her Ethiopian housekeeper Aragu Sisay and here’s what happened:

Today, I learned something new about her. Something awesome. This lady kicks ass!! Here we wade, at 8:55 in the morning, trough mud and rain, to the start line of the 10K, and she sort of hobbles behind my daughter and me (my son had already taken off), and we’re getting wetter and wetter. Then, at 9:10, when we finally clear the start line, she says, “Can I run?” What do you mean, can you run? You are going to run? Like, not walk, but run? “Yes, run!” Heck, yes, by all means, go run. And then this girl takes off likes there is no tomorrow! My son sees her pass by at the 5K, tries to keep up with her, but reports that there “was no way on Earth. She’s like a rocket!”

We met again at the finish line, some 2 hours later (1:52, to be exact). She with a yellow medal, surrounded by other Ethiopian runners. She says she doesn’t know what time she made, but she was there before my son (1:29). And I am thinking, I don’t know anything about this lady! Without training she just runs 10 K. She says she does this for fun in Ethiopia. I am in awe of her. She’s an athlete! [Source] 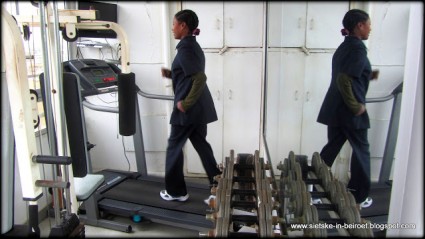 Picture from Sietske in Beirut

Sietske didn’t stop there and decided to look for running clubs that could help her housekeeper train properly for the next Marathon since she was obviously talented and against all odds, found a free of charge running club willing to train Aragu Sisay. The club is called ‘Inter-Lebanon Road Running & Athletics Club’ and welcomes “people of all ages, standards, and abilities, from competition standard to beginners just attempting to run for the first time”.

To cut the story short, Aragu is running several times a week for almost two months now, got new running shoes and is doing great. To make things ever better, the club gives her a ride back home after training free of charge of course.

I have to say this is an unbelievable story for a country like Lebanon but it’s true and it brought a smile to my face. We are fortunate to have people like Sietske and clubs like ‘Inter-Lebanon Road Running & Athletics Club’.