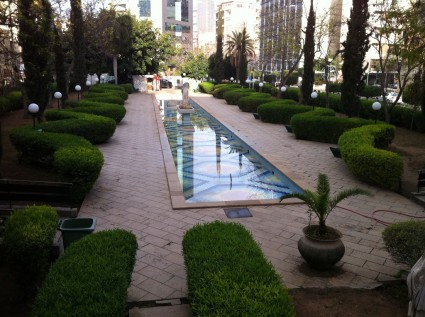 I drove next to this garden for years without once entering it. It’s small and a bit dirty but beautiful. For some reason, both statues in the garden are beheaded (not sure if they were always like that).

The Saint Nicolas Garden is located on Avenue Charles Malek in the Tabaris neighborhood of the Achrafieh District, one of Beirut’s largest districts. The garden that opened in 1964 was designed by the Lebanese architect, Ferdinand Dagher.[1] The area of the garden is 22,000 square metres (240,000 sq ft)[2]. The garden, which faces the Greek Orthodox Cathedral of Saint Nicolas, was also named in honor of Saint Nicolas. [Wiki]

I think the municipality of Achrafieh should work on improving the garden and adding few benches. It doesn’t cost much and the street is full of financial institutions and companies that wouldn’t mind throwing a buck or two on a public garden.