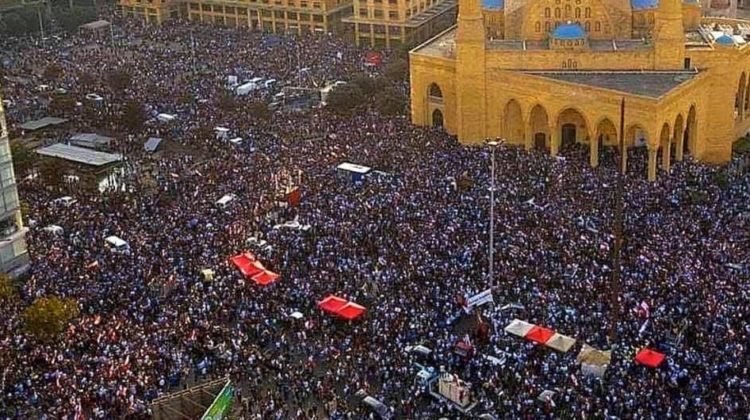 We’re close to a month now since the Revolution started and some people are still living in denial, trying to find excuses to undermine one of the largest protest movement in Lebanon’s history. Roads are still getting closed as we speak, protesters are still filling squares, Martyrs Square and Riad El Solh are still buzzing with people while our leaders are on a different planet. In fact, If last week proved anything, it is that all our political leaders are out of touch with reality, as if they’re not even watching TV or following the news.

Add to that the news that spread tonight that Safadi was agreed as the next potential Prime Minister, which is a big F*ck you to all Lebanese, and Tripolitans specifically. If it took them two weeks to come up with Safadi, then I really don’t see how anyone could possibly defend any of the ruling parties and their practices.

How can you be bothered by few blocked roads but don’t mind activists and unarmed citizens getting arrested, beaten up and interrogated?

How can you be offended by curses and foul language but don’t mind those who undermine our sovereignty and our army every day and every hour?

How can you be so shallow to believe any of those in power is working for our own good while the whole country is covered in garbage and sewers?

How can you entrust ministers to extract oil & gas when it took them 12 years to build a freaking bridge? And God knows how many years to build another in the middle of the highway?

How can you still defend rotten warlords and war criminals claiming to be on the people’s side?

How can you show sympathy to any party or politician simply because he’s less corrupt than others? Don’t you realize you’re getting screwed by both sides?

Well guess what. All these are part of our society, and they all show support in their own different way and they’re down there because the economy WAS collapsing, the country WAS covered in trash, the politicians WERE AND STILL ARE rotten and corrupt and the list goes on. There’s no etiquette when it comes ta a revolution, and if you can’t handle it, there’s no reason to doubt what’s happening and undermine it.

If you’re still sympathizing with a political party, start by holding your own people accountable instead of labeling others. If you’re doubting the outcome of this revolution or have concerns, go down and share them in a constructive way in Martyrs Square or online.

If you think the revolution is a foreign-funded conspiracy, then I’m afraid you’re on the wrong side of history.

History has been made, and it is up to those in power to do their job. Enough asking the people or protesters to take initiatives. Form this freaking government with decent people or resign and go home.