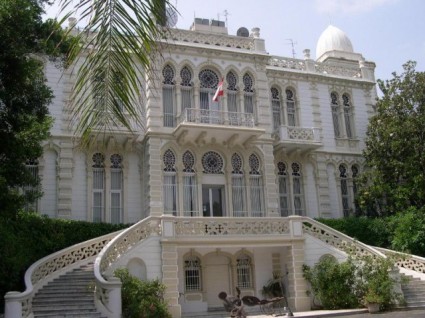 Lady Yvonne Sursock Cochrane presided the APSAD, Association for the Protection of the Natural Sites and Ancient Buildings, for 40 years and is still fighting to preserve Lebanonâ€™s heritage, although pessimistic about prospects.

The Sursock palace is one of the most beautiful houses in Beirut, yet is nowadays being surrounded by skycrappers.

Well there are good ministers, but nobody listens to them! [Former Culture Minister] Tamam Salam made a series of good proposals; none of them passed. [Current Culture Minster Salim] Warde said to me, â€œThere is not one of my proposals being accepted. Thereâ€™s nothing I can do. Iâ€™m just sitting there.â€

The only hope â€” I mean itâ€™s a joke â€” but itâ€™s to do what happened in Dresden, which was completely razed during the World War II. They took the paintings of this Italian painter who had represented Dresden and reproduced the city based on his work.