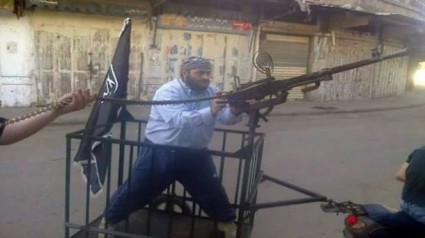 Fighter in Tripoli – via Gino

Hilarious stuff from KarlreMarks. Read it all [Here].

Now in its fourth year, the Annual Conference for Arab Militias has become the event to attend in the world of alternative power structures in the Arab world. This year’s conference entitled ‘Undermining the State Monopoly on Violence: Challenges, Tactics and Theoretical Frameworks’ was held in the Qatari capital Doha and has firmly placed the event on the applied post-structuralism event calendar. The conference was attended by hundreds of delegates representing militias all the way from Libya to Iraq. In order to inform our readers about this event, we sent our correspondent Osman Haraki and he came back with fascinating report.

Workshops, talks, debate panels, this conference had it all. The growth of the event itself has mirrored the unparalleled success and growth of Arab militias and their expanding areas of operation. A few decades ago this was a marginal phenomenon that had a niche presence in Lebanon and some Palestinian camps, but the explosion of Arab militias, no pun intended, has electrified the world of alternative violence and parallel state institutions. And while most of the recent growth has come from Syria, there is no doubt that there are many other countries that will join in the near future.

The stars this week were no doubt the Libyan militia the Guardians of the Islamic Revolution who had stunned everyone with their spectacular kidnapping of the Libyan Prime Minister and his subsequent release within a few hours. Most of the young audience at the conference appreciated both the execution and the idea behind the operation, which represented the latest theoretical trend in militia work. The older generation of militia leaders however frowned upon a seemingly random and senseless operation, but many felt this represented how cut off they had become from modern practices in grassroots violence.