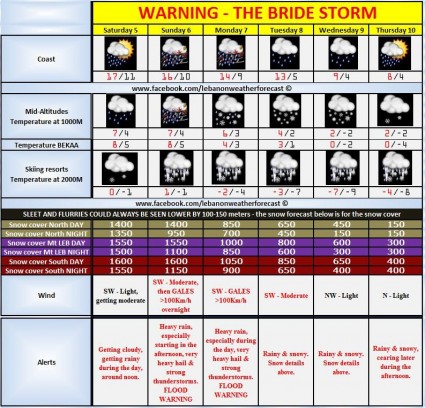 A major storm is likely to hit Lebanon in the next few days with snow expected at 400 meters on Thursday. Lebanon Weather Forecast decided to call the storm “The Bride” for some reason. Here’s a detailed post on what to expect in the upcoming days:

Getting rainy Saturday with some winds becoming strong later during the day, and rain becoming also heavier. Snow level 1500M on average.

Sunday the weather will be rainy and very windy during the first part of the day Sunday, then getting very stormy with very heavy rain, strong winds & heavy hail. Snow cover might go down as low as 1100M during the peak times of the stormy weather. Winds are expecting to cross 100KM/H during Sunday Night & Monday.

Monday: the weather continues as Sunday night: heavy rain & hail with strong thunder & strong winds. Snow level is around 1000M during the day then is expected to decrease down to 850M overnight & in BEKAA as an average (details in the table).

Wednesday the weather will be rainy and snowy with heavy rainfall, heavy hail, and heavy snow in BEKAA & accumulating above 700M during the day, then going gradually below 500M overnight, even 400M in many areas in the evening (150M in North Lebanon – flurries and maybe a snow cover? – to be confirmed).

Thursday: the weather during the first part of the day is snowy in BEKAA and lightly rainy on the coast, some flurries at 300M, with possible cover — TO BE CONFIRMED – then Frigid & clears gradually. Icing Thursday all over Lebanon overnight. [Source]