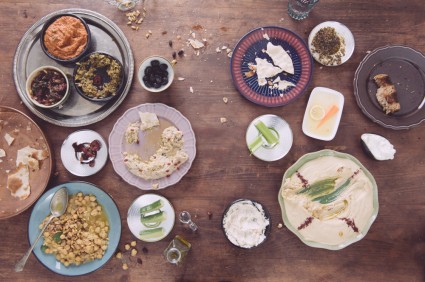 I like food blogs and I’ve been following for a couple of years now Bethany’s website [DirtyKitchenSecrets]. I love how passionate she is about her job and the amount of time and effort she puts into every post she writes. I’ve also had the chance to talk to her on several occasions and was supposed to meet her in Lebanon but it didn’t work out (hopefully on her next trip).

In case you’re still wondering who Bethany Kehdy is, She’s a Lebanese-American who grew up in the Lebanese mountains and spent a lot of time as a child “watching and learning via osmosis the art of Middle Eastern food preparation, cooking and preserving from my grandmother, dad and aunties”. She started DirtyKitchenSecrets back in 2008, launched Taste Lebanon culinary journey across Lebanon, has been featured in dozens of websites and publications and is a proud ambassador of Lebanese cuisine in the world.

She’s also one of the people behind the awesome “Taste Lebanon” video that went viral and helped portray a great image of Lebanon and Lebanese Food.

The only thing missing in Bethany’s career was a cookbook and she recently launched her debut cookbook entitled “The Jewelled Kitchen” after 2 years of hard work. The book was selected as the Cookbook of the Week by The Telegraph and here’s what they had to say about it:

Kehdy is a Texas-born former Miss Lebanon whose blog, Dirty Kitchen Secrets, offers a robust reinterpretation of the food of the Middle East and north Africa, designed for modern living. This book is a by-product – a collection of recipes for things such as freekeh with lamb and rhubarb, spiced squid, lentil and tamarind pilaf, and stuffed quinces. Evaporated milk pudding is based on the Middle Eastern milk flan muhallabiah.

I always wanted to learn how to cook and I think I am going to start with Bethany’s book. I’ll try make some Muhallabiah which doesn’t look that complicated (I hope).

200ml milk
200ml evaporated milk or unsweetened condensed milk
40g caster sugar
3 tbsp cornflour
Large pinch ground cardamom
Rosewater
1 tbsp Arabic coffee or espresso beans, or dark chocolate, finely chopped
1 tbsp pistachios, finely chopped
Put the milk, evaporated milk, sugar, cornflour and cardamom in a heavy-based saucepan and whisk to combine. Put the pan over a medium-low heat and bring to the boil, whisking continuously until thickened. When the mixture coats the back of the spoon, remove from the heat. Pour the mixture through a fine sieve into a pouring jug.

Add a few drops of rosewater and leave to cool for 10-15 minutes. Pour the mixture into glasses or bowls, cover with clingfilm and leave in the fridge until set (2-3 hours). To serve, sprinkle with the coffee beans and the pistachios.

I am passing by Librairie Antoine today to see if they have the book and get it. You can order the book or download the Kindle edition on [Amazon].