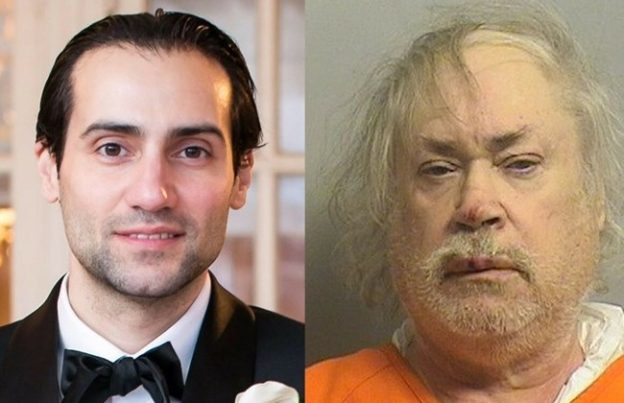 Update [Sept 27, 2017]: The Jabara family was interviewed by CNN, where they ask how many red flags one must raise to prevent further killings. They don’t understand how a violent felon was able to post bond and return home next door to his alleged victim. The trial for Khalid’s killer where he will answer to first degree murder and hate crime charges, is scheduled for November.

A 37-year old Lebanese man called Khalid Jabara was shot dead yesterday by his neighbor, 61-year-old Stanley Vernon Majors. Majors was just released from prison and had a long history of criminal charges and racial slurs against the Jabara family. He ran over Khalil’s mother few months ago, got arrested and then was released on bail with no conditions on his bond – no ankle monitor, no drug/alcohol testing.

Here’s what Victoria Jabara Williams said about her brother’s murder:

I ask that you share this FB post throughout the community for the murder of my brother, Khalid Jabara so you can be outraged, just as we are outraged. I want to shed light and bring awareness to the negligence that occurred from the first moment the neighbor..this monster.. called our family ‘Dirty Arabs’, to the time he ran over my mother with his car, to the two Protective Order violations,and our constant vigilance to communicate and be proactive with the DA’s, to the fact that they let him out of jail after 8 months, to the fact that my brother called the police to explain to them that we were scared because we heard he had a gun, to the fact that the police left, saying they could do nothing, and, 30 minutes later….the fact that the criminal walked up to my brother and shot him on his front porch.
At the end of the day, my beautiful brother had a heart like no other. Sensitive to the core, he loved others so much and wanted to be loved back. I’ll miss his jokes (I stole all my jokes from him!), his love for all things electronic, his love for my mom and dad, Rami, and his tenderness towards his nieces. This angel will be missed. Love you, Khalid.

The police had already received over 20 calls since 2015 from Jabara’s residence about Majors. He was a known danger, he was sentenced to prison in 2009 for threatening to terrorize Los Angeles, he sexually and racially harassed Jabara’s mother in 2013, he broke Khalid’s mother’s shoulder & ankle in 2015 and yet somehow he was released on bail only after 8 months in prison.

Khalid death could have easily been prevented as the police knew this man was fixated on the family for a long time and had already ran over the mother last year. This is not the first hate crime against Arab-Americans and definitely won’t be the last.

PS: Dear DailyStar, Is “Oklahoma man shoots dead ‘filthy Lebanese’ neighbor” the best title you could have come up with?