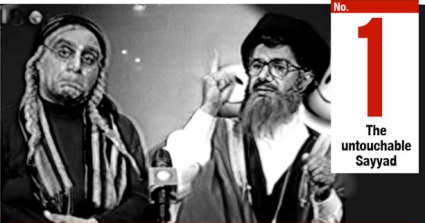 Here’s a nice compilation of the ten silliest acts of censorship in Lebanon written by Matt Nash from NowLebanon. The Steven Spielberg “Tintin movie” censorship which we posted first about made it to the list.

1- The Untouchable Sayyed
2- Jews?? Ban!
3- Fayrouz banned from local radio for six months back in 1969
4- Honest Abes all
5- Censorsing a play about censorship
6- Help The Movie
7- Director Steven Spielberg and The Tintin movie
8- Spray Painting for some, not all
9- Legendary Singer Marcel Khalife
10- Flip-flop fiasco

As noted above, most politicians respond to criticism and mockery with individually targeted lawsuits which likely prompt authors/artists/etc. to self-censor in the future while leaving the “offensive” content in the public domain. But one of Lebanon’s “bosses” is simply beyond reproach: Hezbollah leader Hassan Nasrallah is in a class by himself. Riots over a 2006 television show mocking him served as notice: leave the Sayyad alone