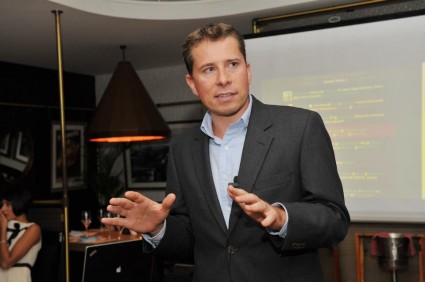 I haven’t had the chance to attend any of the British Embassy’s events yet but I always follow up on Ambassador Tom Fletcher’s interviews, blog posts and articles as the man is more in touch with what’s happening in Lebanon and what Lebanon needs than our own officials. He’s very active on Twitter, posts on his blog regularly, and doesn’t miss a chance to meet and discuss all sorts of topics that are of interest to the Lebanese and specially its young and promising youth.

One of his most recent articles “Success in the 21st Century – Ten Questions for Lebanon 2020“, pretty much sums up the challenges that await us and he focuses on one particularly crucial challenge, our lack of infrastructure, that he discussed in the virtual dinner held few days ago.

How do you skip a technology generation? Traffic lights, the internet and electricity are great British inventions. Put them in, and the rest will follow – HA Tom Fletcher

I think we should sign a petition to grant him the Lebanese citizenship and ask him to run for parliament.

Here’s a small excerpt from an interview he held with Journalist Patrick Galey back in 2011:

Q: What are your thoughts of the country so far?

A: The first thing is just how stunning the place is. Even though everyone had told me to expect that, I still find that overwhelming. When I drive up the mountain in the evening and look back at the sunset, it’s just extraordinary. But then also, as we discussed, the complexity of Lebanon, and the fact that on the surface so much is logical and yet beneath the surface it becomes much, much more complicated. So I’m very daunted by the scale of the challenge in trying to understand how politics and society works. I think, most of all, [I’m struck] by the energy and the dynamism of life here and of people here. You know, the talent of the people I am working with at the embassy, who actually are more talented I think than any group of staff I have worked with in much bigger embassies, but also then the talent of the people you meet around the circuit, it’s just overwhelming how many incredibly well-educated people you come across, who have a point of view on everything, very articulate, often in a third language. That is extraordinary. I think that encourages me that this is somewhere where, as an ambassador, you can actually have an impact because people want to talk and people are receptive and people are engaging. It’s not a country where an ambassador is just writing reports for his capital and going to diplomatic receptions. Here you are actually part of the game.