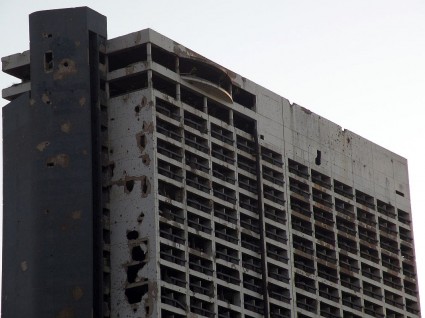 “For social scientists, for civil society at large, these few buildings represent the evidence of how ugly we were,” said Abdul-Halim Jabr, a Beirut-based architect and urban design consultant. “And a kind of lightning rod for some kind of truth and reconciliation.”

More than 30 years have passed since The Battle of the Hotels in Beirut, yet the heavily damaged Holiday Inn stands alone to remind us of the ugly Lebanese civil-war that resulted in the death of over 100,000 Lebanese. While other ravaged building are being restored, such as Beit Beirut (also known as Beit Barakat), any plans for restoring the Holiday Inn remain shrouded in uncertainty. 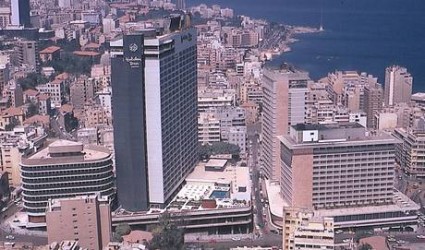 Aerial view of the Holiday Inn in 1974, courtesy of the Ministry of Tourism

The reason why I remembered the Holiday Inn is because of an article published on the National today on Beirut’s most famous bullet-scarred building and the future that awaits it. I posted few excerpts below but I recommend that you read the whole thing [Here].

I think it should be restored as a fully functional hotel that would include a cultural center and a Museum for the Memory of the War. 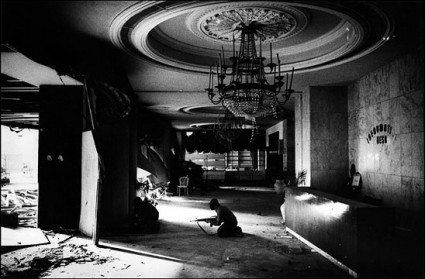 Last month, the US$20million (Dh73.4m) Beit Beirut project to restore the venerated structure was officially kicked off by the city’s municipality, with the hope of opening by the end of 2014.

Not far across town, another empty, concrete shell looms over the city’s downtown, standing out near new developments in the prime real-estate district. The drab edifice – a relic of the early years of the civil war – is still known simply as the Holiday Inn, though it has not seen a paying guest in more than three decades. It remains a hulking reminder of the Battle of the Hotels during the civil war that left more than 100,000 Lebanese dead.

“The Holiday Inn cannot just be erased. Seeing it prevents people from getting rid of what they want to forget [about the civil war],” said Sara Fregonese, a postdoctoral fellow at the University of London who has been studying the building as part of her research on the impact of conflict on urban life in Lebanon. [TheNational]

See Also:Simon Has Unfortunately Lost His Fight Against Leukemia