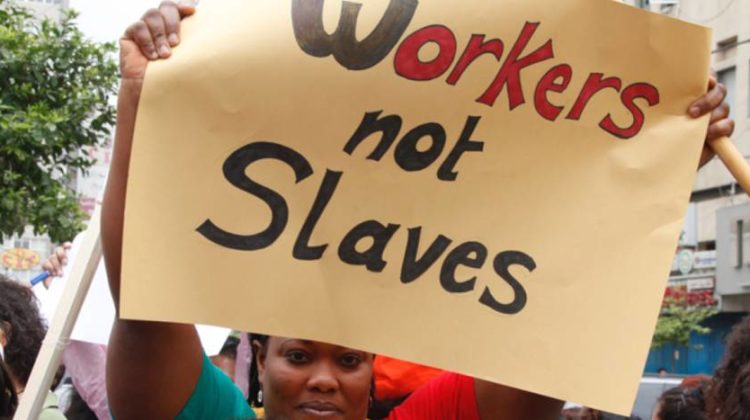 A Lebanese businessman got kidnapped last week in Ethiopia, then released a week later after the Lebanese authorities threatened to take counter measures if no clear answers were provided to the whereabouts of Jaber. A couple of days before his release, tens of Lebanese took the streets to demand his release and one guy “jokingly” published a couple of videos pretending to kidnap his Ethiopian domestic worker, and “jokingly” ordering her around to stand on one foot.

When I shared the video, I got a lot of comments from people stating that he’s a respectful guy who’s only messing around “wou ma badda hal2ad”. I don’t know the guy, and this is not directed against him personally, but what he did was wrong for several reasons:

1- Kidnapping is not something you joke about:
A Lebanese businessman is kidnapped, the authorities are threatening to take actions, the last thing that should come to one’s mind is pulling such a silly joke, as it might backfire, complicate things and possibly delay the hostage’s release. The rational thing to do is to lay back and avoid such pranks. Protest all you want and pressure the authorities, but that’s about it.

Domestic workers have been protesting for years against the Kafala system and have long criticized how the residency of foreign workers is tied to the sponsorship of their Lebanese employer. Coming out on TV and doing what he did only reinforces this master-slave role, whether he intentionally meant to do so or not.

We live in a racist society. This is a given. This guy may not be racist but such a video and such a joke could easily go viral and the next thing you know, people are randomly pretending to kidnap their domestic workers and sharing on social media channels. Far fetched? I don’t think so.

In fact, one of Lebanon’s elected MPs suggested indirectly that we should kidnap Ethiopians if this pattern of kidnapping Lebanese continues. It’s a good thing no one listens to him.

4- It’s ok because everyone does it:

One of the comments claimed that we’re living in a third world country and a backwards society where we barely have human rights, so we shouldn’t pretend to be that open minded. I think such a comment is the key reason why we will never advance as a society. When there’s a wrong, you should point it out.

All in all, I hope those who thought the joke was funny to reconsider and look at the bigger picture. Even if the guy’s intentions are good, the joke is a bad one.