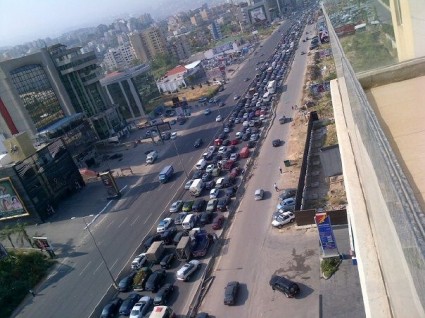 Jal el Dib residents blocked the highway on both ways and the maritime road as well today after the 1-month deadline they gave the government to approve the construction of a new bridge expired. Traffic due to the protest was unbelievable today and reached Tabarja. Roads were re-opened around 9am.

I am usually against protests that may disrupt people’s daily routines, but I for once believe Jal el Dib residents should keep on protesting until their demands are met, because the removal of that bridge has disrupted their lives and those living in Jal el Dib’s surrounding areas and it is unfair that they only suffer.

This is not a protest for lowering gas prices or releasing political prisoners, but a protest related to roads and traffic and the isolation and discrimination of a whole area due to the incompetence of our current government and local authorities. In fact, Jal el Dib residents have to suffer everyday what we suffered for one day, so it’s ok if we sympathize with them one day every week until they get a new bridge.

On a last note, I hope Jal el Dib residents will hold accountable their representatives in the upcoming parliamentary and municipal elections and pave the way for other Lebanese to do the same.

PS: If the government has a problem financing this bridge, I suggest they take out 5% of the 400$ million dollars they are planning to pay Fattoush for his illegal business.