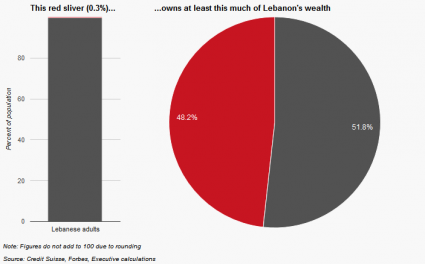 The Mikati and Hariri families alone have 15% of the all the private wealth. Read more about it [Here].

At least 48 percent of Lebanon’s privately-held wealth is concentrated in the hands of some 8,900 citizens — just 0.3 percent of the adult population — according to calculations based on a new report. The nation’s staggering wealth inequality is detailed in Credit Suisse’s Global Wealth Databook 2013, released last week. The distorted wealth figures help to push the country’s Gini coefficient, a measure of inequality, to 86.3 percent — the fourth highest globally behind Russia, Ukraine and Kazakhstan (see chart, below left).*

While Credit Suisse did not directly publish how much wealth is in Lebanese millionaires’ hands, Executive was able to estimate a lower bound based on the report and Forbes magazine’s list of billionaires. Lebanese worth more than $1 million own at least 48 percent of the country’s wealth (see chart above). This figure, however, is a minimum estimate. It also implies that the rest of the country owns less than 52 percent of private wealth, valued at some $91 billion.