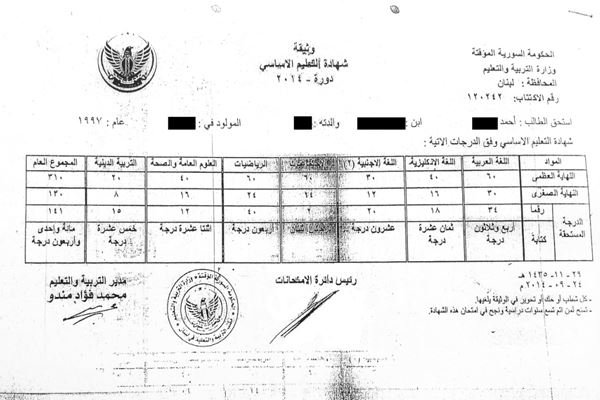 The picture above is a school diploma given to a Syrian student enrolled in a Lebanese school by the temporary Syrian government’s Ministry of Education. You’d think this is a fake diploma at first, specially that it mentions Lebanon as a province (in Syria?), but the truth is these exams were done by the Syrian Opposition back in 2013 (under the supervision of the Lebanese Army) and financed by USAID according to Al-Akhbar. Having said that, Education Minister Bou Saab had declared that these exams are illegal of course and that there’s a procedure set for Syrian students in Lebanon whereas they can apply for official exams and send the diplomas to the Syrian Embassy in Beirut for validation.

So to sum things up:
– If you are a pro-regime Syrian refugee in Lebanon, your diploma will be certified by the Syrian Embassy that may not be recognized by certain institutions and countries outside.
– If you are against the regime, your diploma will be issued and certified by a temporary government that the Lebanese authorities don’t recognize yet but that is acknowledged by some countries abroad.

In both cases, the real victims are refugee children who are trying to continue their education in Lebanon yet are facing all sorts of obstacles. Just to give you a glimpse of how bad the situation is, it is estimated that 50% of Syrian refugee children aged between 5 and 17 are out of any form of education. We are talking about hundreds of thousands of children who are either forced to work or being abused or end up begging on the street. On top of all that, those who are lucky enough to enroll in a school are graduating with illegal and unofficial diplomas.

Update: Speaking of Syrian Children in Lebanon, check out this article from The Guardian on how those forced to work on streets of Beirut face severe exploitation.