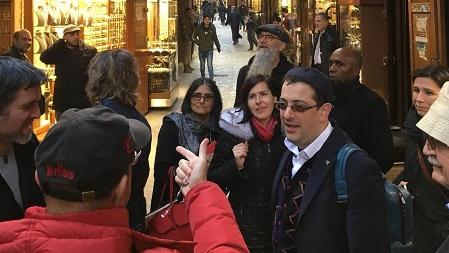 The Grand Mufti of Tripoli had an unusual visitor this week, London Rabbi Alex Goldberg. Rabbi Goldberg is the first rabbi to travel to the city since 1970s but not the first to visit Lebanon. Back in 2012, two Anti-Zionist Rabbis visited the city of Sidon following invitations from pro-Palestinian activists and a couple of years ago from what I heard, a Rabbi attended the private re-opening of Beirut’s only synagogue, the Maghen Abraham Synagogue, which was renovated but is still not accessible to the public.

Goldberg visited a 17th-century synagogue in the mountain town of Deir el Qamar where a Jewish community once lived peacefully. Most of the Lebanese Jews lived in Beirut but there were also communities in other cities like Saida and Tripoli and there are still intact synagogues mainly in Saida, Bhamdoun and Deir el Qamar. The Synagogues in the Chouf area were built to serve the local Jewish population, some of whom were part of the immediate entourage of Fakhr-al-Din II.

According to the article, the Rabbi was given “a tonne of safety advice” was told at the airport to remove the barcode from his passport that showed he had travelled to Israel, which would have barred his entry to Lebanon […] He was told to conceal his kippah, which he did with a “trendy hat from Urban Outfitters”.