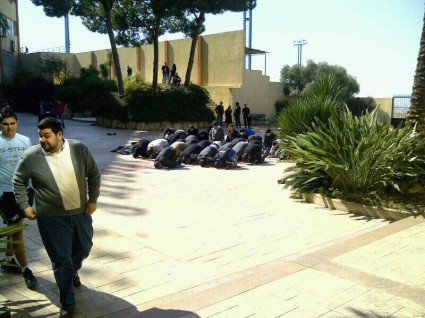 I read a report few days back that Muslim students in Antounieh university were demanding a prayer room inside the university but I never really gave it much importance and I honestly still don’t think it’s a big deal.

Whomever is making out of it a big deal are political parties who want to score points left and right on the expense of Antounieh students. Indeed, instead of leaving those students alone and letting them focus on getting a proper education and making the best out of their university lives, they are dragged into useless and pointless fights. Moreover, the parties against setting up a prayer room for Muslims are acting as if it’s an Iranian nuclear attack on the USA and taking the matter way out of proportion, and Mustapha agrees here.

Having said that, I strongly urge all universities in Lebanon to simply ban politics and political parties on their campuses and incite students to focus on their students and developing their intellectual skills. Added to that, they should forbid any political side from interfering in their internal matters and reprimand students promoting their political parties inside the university. Many universities such as USEK have taken this initiative and it’s working quite well!

As for the problem at hand, there are 2 plausible solutions in my opinion:
– The Antonine University is a Roman Catholic institution and does not accept establishing a prayer room for non-Christians as it violates its bylaws and principles. If few Muslim students are that bothered for not being able to perform their daily prayers and feel it’s more important than the quality of education they are getting, they can go to the nearest mosque or simply transfer to another university. Those students surely knew that it’s a Christian university from the start and joined it for getting an education, not setting up a prayer room. The university could provide them with a transportation means to show good faith.

– The Antonine university could take into consideration its Muslim students’ request and set up a prayer room right outside its campus where it does not violate its rules and beliefs. However, even though I was sort of supportive of this solution, I worry that it will spark similar protests in other educational establishments and lead to sectarian brawls among the students.

Hoping and praying that things will not degenerate into sectarian fights among students in the next days to come. Teachers could play a role here in failing any student engaged in a protest or a political fight or even a debate while on campus.