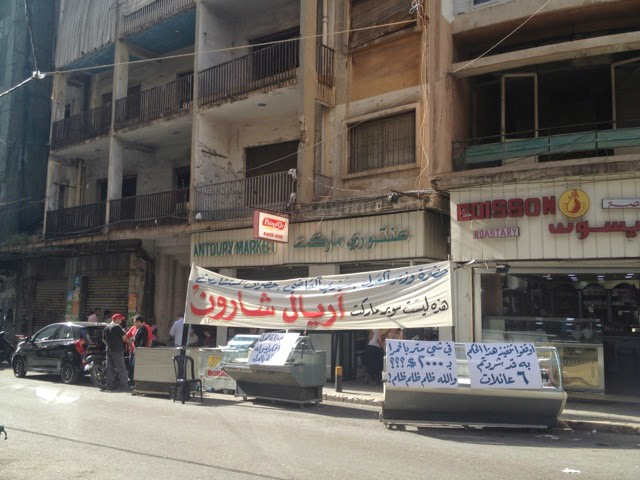 If you pass by Makdessi street in Hamra, you will notice the above banners outside Antoury’s market. The big banner says “This is not Ariel Sharon’s Supermarket” while the small ones translate roughly to “Stop this unjust decision that will leave 6 families homeless” and “Can you find a property in Hamra that sells for $2000 per square meters?”.

So what’s the story?
Based on The Beirut Report’s post, a relative of the shopkeeper is saying she was offered only $60,000 to vacate both the shop and the shopkeeper’s 130 square meter apartment. Obviously, the market price for such a property is at least 10 times higher but the woman is an old renter and apparently that’s the amount she was offered after several court rulings.

I don’t know how she ended up getting $60,000 only and it does sound like an unfair amount, but that’s one of the many consequences of this old rent law that we will soon get rid of. The old law is affecting both tenants and landlords and both parties rarely manage to settle things out in a fair way.

My friend Amer said this place had one of the best Labneh sandwiches in Beirut.