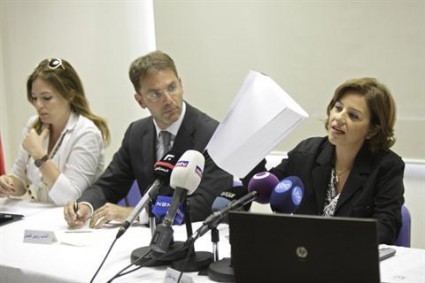 Picture from the Daily Star

According to their study, there should be no amendments to Law 174 as this will harm not only people’s health, but the national economy as well. The study comes as a response to the original E&Y study made earlier this month.

Following the spread of inaccurate information regarding the alleged negative impact of Law 174 on the economy and touristic establishments, the AUB Tobacco Control Research Group and activists from Lebanese civil society decided to hold a press conference on September 4, 2012.

The estimated drop in tourism revenues is erroneous and entirely based on guess estimates: The analysis assumes that since the interviewed restaurant owners said that 25% of their revenues are based on tourists, so the analysts directly mapped this into an expected drop in tourism revenues. They have also linked this to shisha-loving tourists fleeing Lebanon after the ban. This is a highly reductionist view of the tourism potential of the country, since it is very doubtful that tourists flock to Lebanon only to have a taste of shisha.