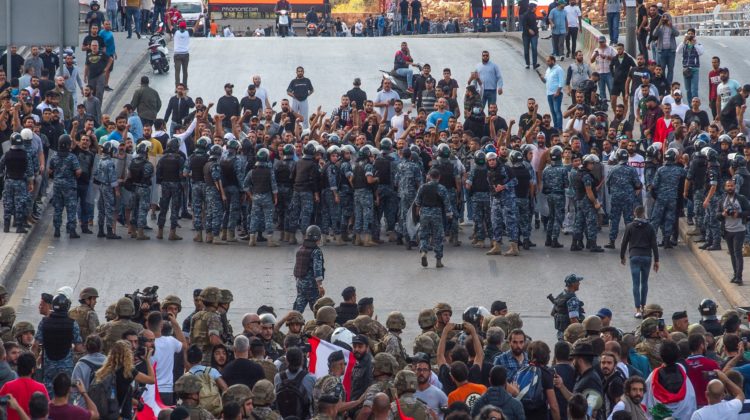 After nearly two weeks of protests, PM Hariri has finally announced his resignation today. A couple of hours before his speech, thugs attacked peaceful protesters in Riad el Solh and Martyrs Square injuring elderly and women and setting tents on fire. Neither the cops nor the army did much to stop them this time, but the whole world saw their true face.

The square was cleaned up quickly, tents rebuilt in no time and more people joined back the protests to celebrate the PM resignation and keep pressuring those in power to designate an interim government and lead the country out of this mess!

Few thoughts on the crucial day:

1- What took Hariri so long to resign? We have the right to know what was happening in the past two weeks and whether there were any serious attempts to form a new government. People have been protesting for 13 days now, they deserve more than a 2-minute speech!

2- Thugs can’t break our will: They can trash all the tents they want, they can try to assault peaceful protesters and security forces, they can try to scare young men and women but we shall prevail. I wish there was a way to engage with these young men and women, understand what’s or who’s pushing them to be this ruthless and violent. I want to believe that they also are struggling and want the same demands we do, but there’s a huge fear factor that needs to be broken and that will take a lot of time.

3- Roads are still closed: We’ve been hearing a lot of requests to re-open some roads or all of them. As I said in previous posts, closing roads is a key pressure point on the authorities and losing it might slow down the momentum of these protests. This being said, there are several roads that can be opened to ease traffic while keeping the main key points closed. We should leave that to the organizers in each area to negotiate with the army or police.

4- Resignation is a start, but forming a new government is the most crucial part! We should not get fooled by the resignation today, as they might come back with the same people next week. Having a government formed of INDEPENDENT and COMPETENT technocrats and professionals is a MUST and if we can’t have that, everything we did will go in vain.

All in all, and I said in all my previous posts, one must always remember that the economy was crumbling, the country was headed towards total collapse before this revolution took place. No one wants to go back to where we were two weeks ago so let’s be more patient, committed and focused on the next step. More importantly, I encourage all protesters to engage in peaceful and constructive talks online or offline with those who disagree with them, as I am confident we all have the same demands, but some of us are too blinded by their political allegiance and need a wake up call.