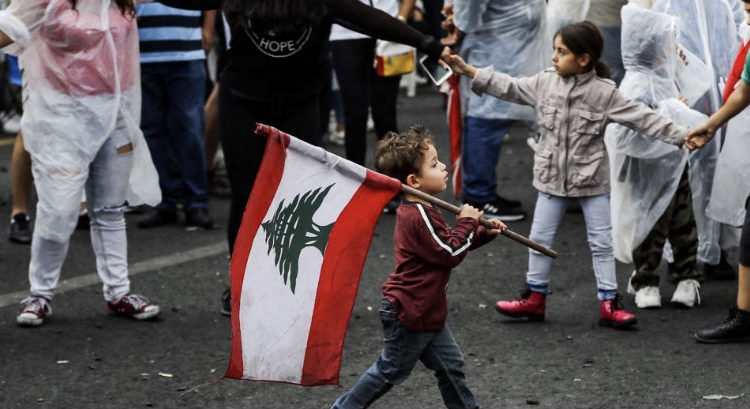 Tomorrow will mark two weeks since the revolution has started and the government hasn’t resigned yet. We’re still not sure if they’re even considering forming a new cabinet or they’re simply stalling till the protesters get bored, but time is against everyone at this point, and Salameh’s appeal to find a quick solution sums up how critical the situation is.

Why isn’t the government resigning? Who’s blocking the formation of a new government? Are they trying to strike a new deal to screw us all? God knows what’s on their minds but they’re not listening to the people that’s for sure. As for the protesters, main roads are still blocked despite attempts and talks about opening them.

I will stop at this point briefly because it has become a sensitive one and we’ve witnessed several incidents where drivers are trying to run over protesters in an attempt to pass. Here are few points worth mentioning:

1- Blocking roads is a LEGIT WAY of protesting : Amnesty International clearly states that the right to freedom of assembly, including the legitimate blocking of roads, is a right that should be respected by the authorities.

2- Blocked roads are a vital pressure point: Asking protesters to open the roads means compromising and the second they do that, they will lose an important factor of their protests. If everything goes back to “normal”, the revolution will die out and that’s what those in power are betting on.

3- Don’t ask protesters to get organized: We’re talking about a nation-wide revolution, people from all over Lebanon are blocking roads and protesting. The argument that they should get organized and set up opening and closing hours for the roads is total BS. In fact, that’s the worst possible scenario for me as this will encourage thugs to set up check points and harass people.

4- People have the right to go to work: It is hard to argue against that to be honest, I know many who are cheering for the protests but have to drive to work or lose their jobs, and sometimes it’s impossible with all the blocked roads around them. I believe the responsibility here is on the police and army to be honest, because there are plenty of inner roads that can easily be kept open without engaging the protesters on the highways and main roads.

My suggestion here to those protesting and I’ve said it before: Don’t shut down your neighbor’s road or some inner road, you’re not doing anyone any good. Keep blocking the main roads and don’t confront drivers like you did in Jal el Dib today. Life will never go back to normal if highways are blocked but those in power are counting on turning us against each other, so let’s not help them.

As for the frustrated drivers: The majority of those protesting, unlike the rumors you hear on propagandist TVs and pages, have the same demands you have. Blocking roads may be affecting your every day commute but if things stayed the way they are, you would have probably ended up without a job to go to eventually. It is not the revolution that’s causing an economic collapse, it’s the imminent collapse that triggered these protests and despite all that and after two weeks, those in power refuse to resign.

They want us to weaken and go home, they want the people to fight, they’re spreading their hate and lies, they’re fabricating stories and labeling people, they’re trying everything to weaken this revolution but they’re failing and the honorable stances so far taken by the Army & ISF are troubling them even more. People need to stay focused, be more patient and resilient, we’ve waited 30 years for this moment and we will not let the opportunity pass!