Picture from the PanArabia Enquirer

Before any of you starts commenting, this article was written by The Pan-Arabia Enquirer, the finest SATIRE from the Middle East, so it’s a totally made up story but I thought I mention it because the comments are hilarious and even funnier than the article itself!

DUBAI: Emirates has announced that it plans to trial new shisha lounges aboard its A380 fleet. In a statement released this morning, the Dubai-based airline revealed that the lounges would be available to business and first class passengers on several of its long-haul routes flown using Airbus’ superjumbo, starting from next month.
“Alongside unique offerings such as our Signature Spa and Onboard Lounges, with our new Signature Shisha Rooms premium customers will be now be able to relax amid luxurious surroundings with a traditional waterpipe,” the airline said in a press release.

“This new service will provide our Middle Eastern passengers with the sort of home comforts they’ve come to expect on our award-winning airline, while presenting those flying to the Middle East for the first time with the opportunity to sample one of the true tastes of Arabia before they’ve even landed.”

According to the statement, passengers will be able to pre-order a shisha from the onboard menu while at their seat and retire to the lounge after the main meal. [Link]

Here are some funny comments: 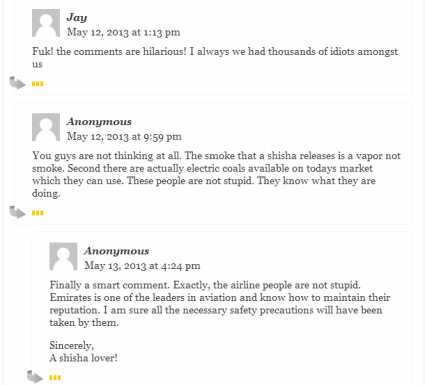 This one is epic! 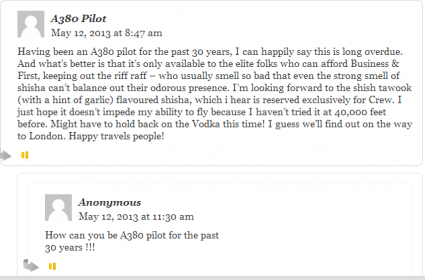 The Pan-Arabia Enquirer website also went down yesterday for a couple of hours due to this article. 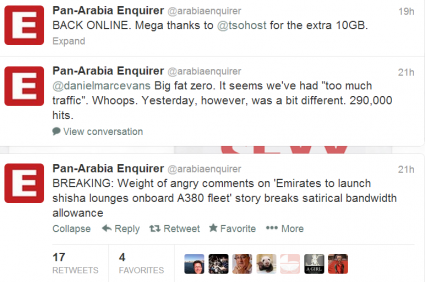 Jokes aside, I am sure Lebanese would have loved to have a Shisha service onboard.

Speaking of funny articles, here’s another story that I am still finding hard to believe: A Saudi student living in Michigan was arrested yesterday by the FBI after neighbors saw him with a pressure cooker. As it turns out, he was cooking a traditional Saudi dish, the Kabsah. [Huff]