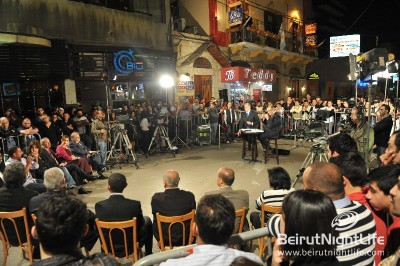 As Nency posted yesterday, new rules were set for the nightlife in Gemmayze and a certain number of pubs were closed.

It appears that similarly to 2008, some pubs who have “wasta” are being kept open while other random pubs are being closed.

I was thinking about it this morning, and was wondering what difference does it make for Gemmayze habitants to sleep at 12 instead of 1 or 2 ?

For all i know, old people or people who don’t go out much and have kids sleep no later than 10 or 11 pm. So changing the closing hours is really stupid. The real problem is the traffic and the lack of parking space and Ziad Baroud, the minister of interior, proposed a very efficient way to handle it.

He urged Beirutâ€™s municipality to make efficient use of the Charles Helou bus station, by transforming it in part into a parking lot for people going to Gemmayzeâ€™s restaurants and pubs at night.

So what’s the big deal here ?
Let the ISF force the rules concerning the double glazing and sound proofing the ceilings, monitor the streets for drunk and annoying people and make the street a pedestrian one and everyone’s happy.