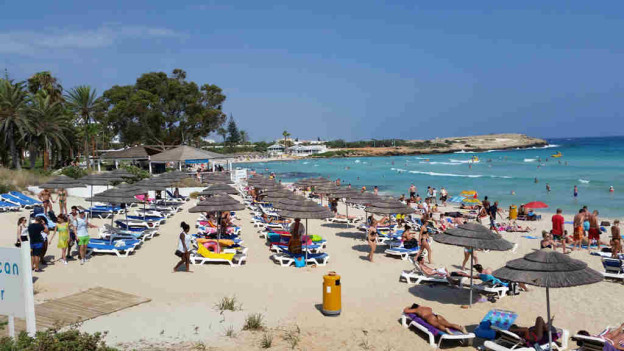 I am writing this post for two reasons:
– Since I’ve been to Ayia Napa twice in the last few weeks, a lot of people have been asking for recommended hotels, night clubs and restaurants there as well as things one can do, so I thought I mention all of them in one post.
– I am preparing a comparative post between the Jounieh bay and Ayia Napa and how we’re wasting so much potential and doing it all wrong in Lebanon.

As mentioned earlier, I’ve spent two weekends in Ayia Napa twice this summer, once with my wife in mid-June and another time with a group of guys for a bachelor in early July. The first weekend was a pure romantic and touristic one and I had a lot of fun, while the second weekend was wild, crazy and a different kind of fun.

Here’s a small review of both experiences with my recommendations for places to go and things to do if you’re visiting Ayia Napa soon as it looks like half the Lebanese population is going there or has already been to Ayia Napa this summer. Before I begin though, here’s a small map that shows you where the city center is (Blue circle) and how far it is from Limanaki beach (Green circle) where I spent my first weekend and the popular Nissi beach (Red Circle). Most of the bars and night clubs in Ayia Napa are located around the main square near the town hall which is where I was staying the second time. 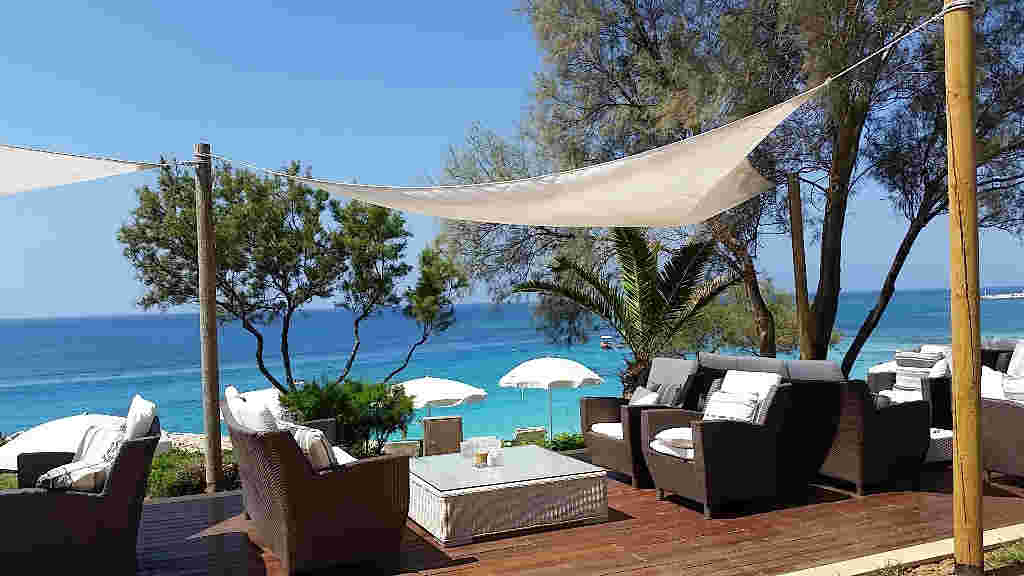 I spent my first weekend at the Grecian Sands hotel, which is a four star hotel located right on one of the longest and most beautiful sandy beaches of Cyprus. The hotel is one of the best in Ayia Napa, the rooms are very spacious, there’s a nice pool and a direct access to the beach. There’s one thing that annoyed me though is that it was very hard to find a long chair by the pool or next to the beach as people would just put their towels there and reserve it for the whole day even if they aren’t there. 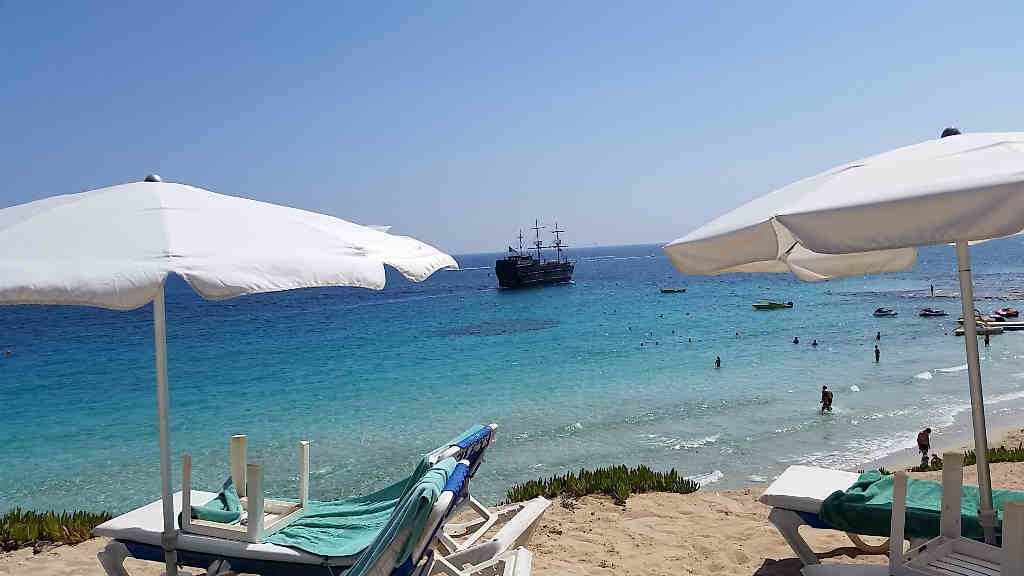 I spent the first day mostly on the beach and walked in the afternoon to the center of Ayia Napa to check out the restaurants and shops there. Even though it was 15-20 minutes walk, I highly recommend you get hats and put sunscreen because it’s very hot and the sun is very strong. There are restaurants and supermarkets left and right wherever you go, and most of the places I’ve tried were quite good. I went to the Bed Rock cafe, Four Seasons restaurant, Erofili, Eurobakers, Golden Arrow, Los Bandidos and Kings Sword. 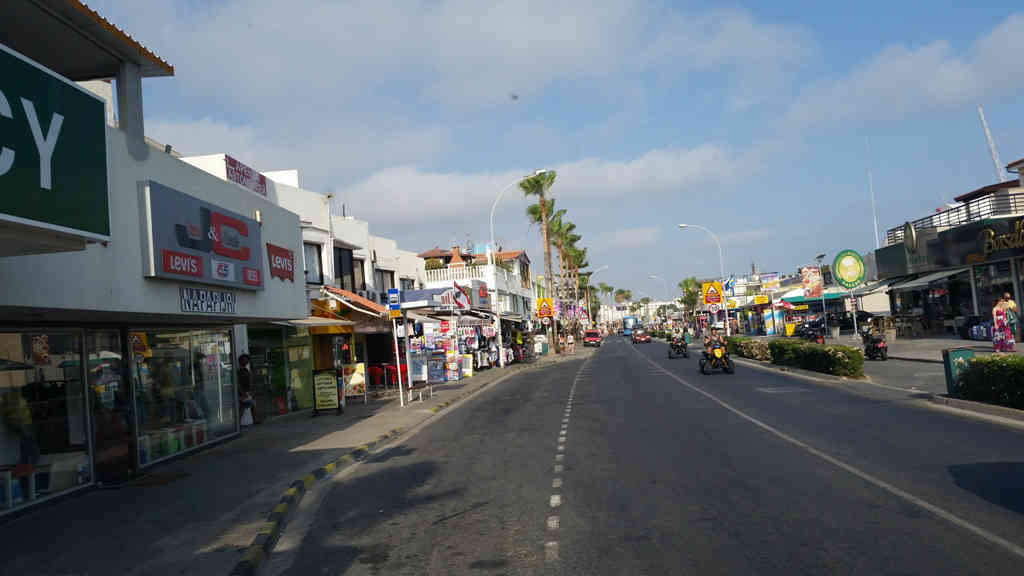 In addition to the restaurants, there are small shops that sell fresh cocktails, yogurt and Sharwama (pork, lamb and chicken) which are quite good and worth a try. If you like pork, go for the Pork Shawarma Pitas at Georgie’s Handy food. 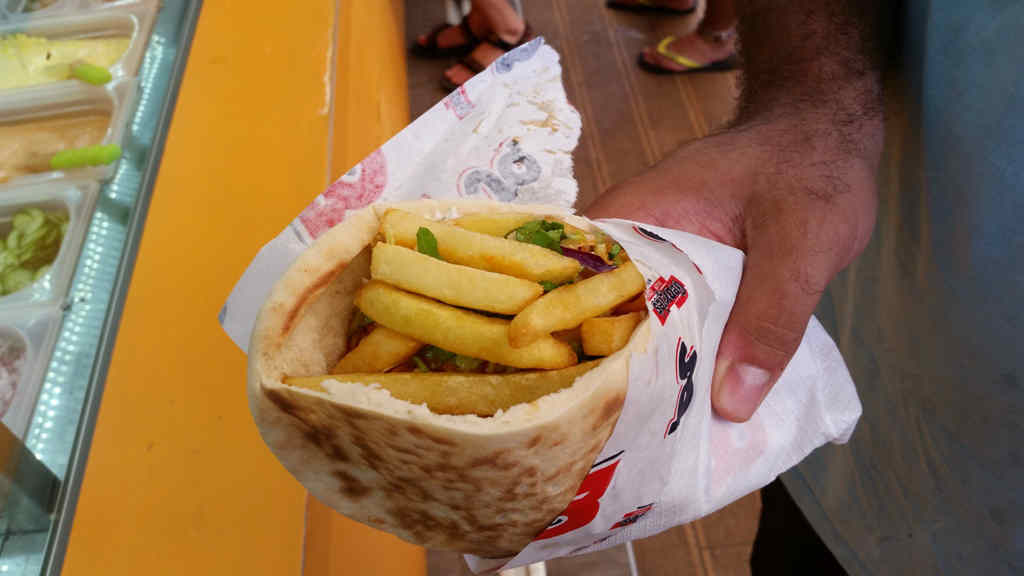 Since Nissi beach was very far from my hotel and it was too hot to walk there, I thought of renting a buggy for one day and going out of the town for some sightseeing. The one I got below cost me 80 euros for 1 day and I had to pay an extra 20 euros for the gas. There are cheaper alternatives like a scooter or a quad that would cost you as little as 20 or 30 euros per day. The buggy was quite easy and fun to drive, except for the reverse gear which was annoying. Note that they take your passport and need a copy of your driving license or just the number on it. 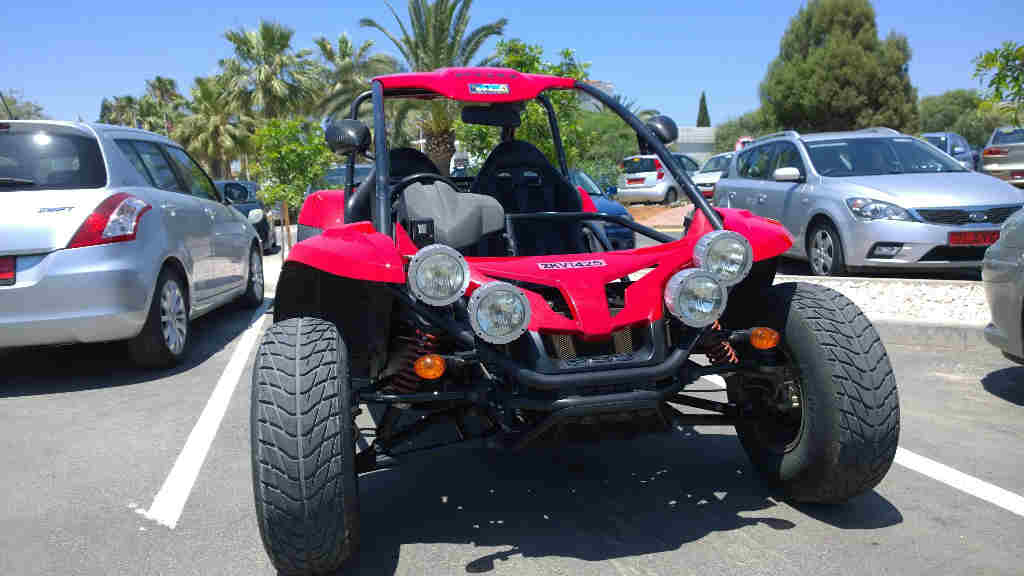 I drove to Cape Greco which is at the at the southern end of Famagusta Bay, and went as far as Potamos, which is a small village that has two fresh seafood restaurants. The food took forever to come but it was some of the best fish I’ve ever had so it’s definitely worth a try. You could park your buggy basically anywhere and since a lot of tourists there rent them, you won’t feel weird driving around cars even on the highway. Keep in mind that they drive on the left side in Cyprus just like the UK. 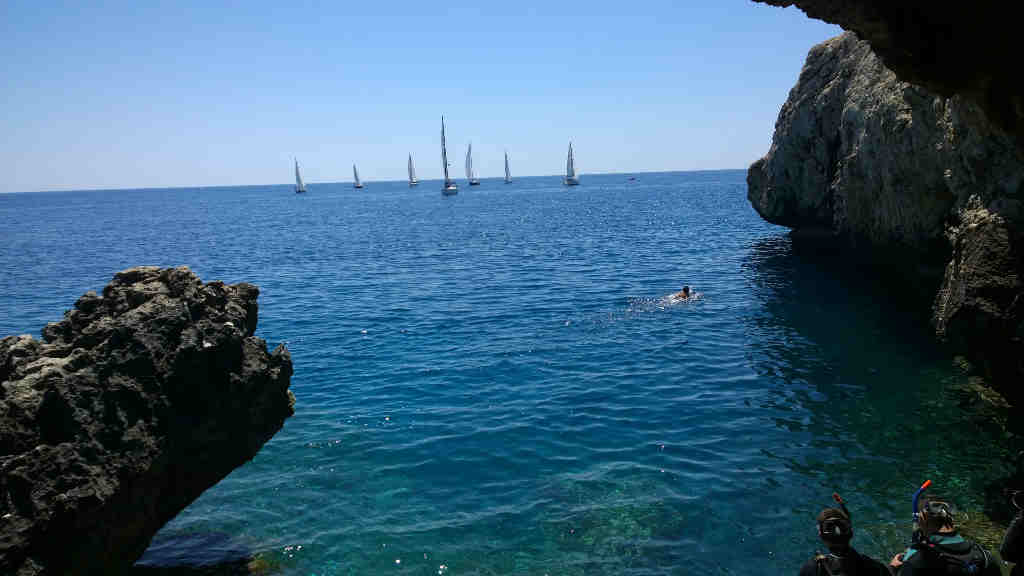 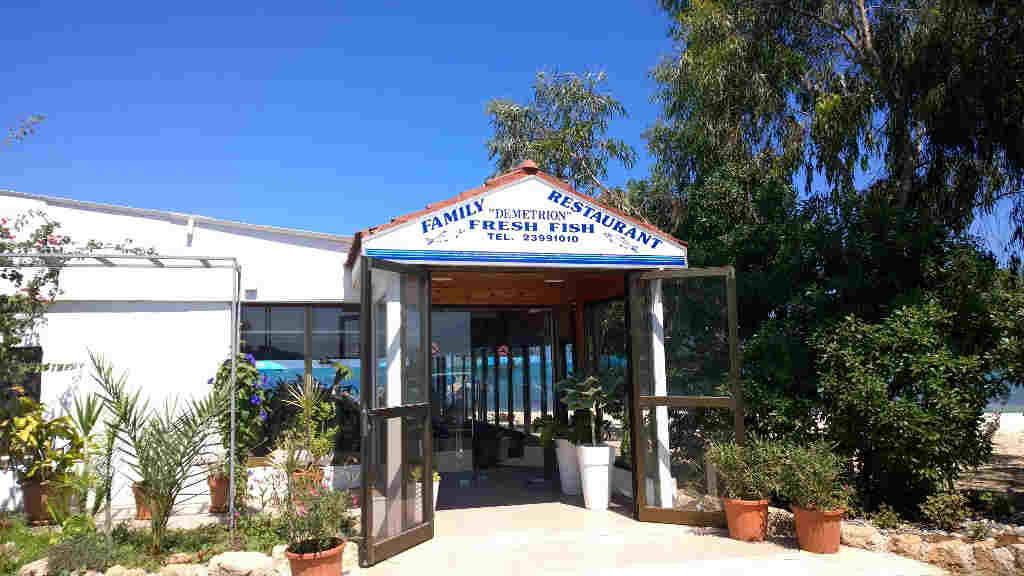 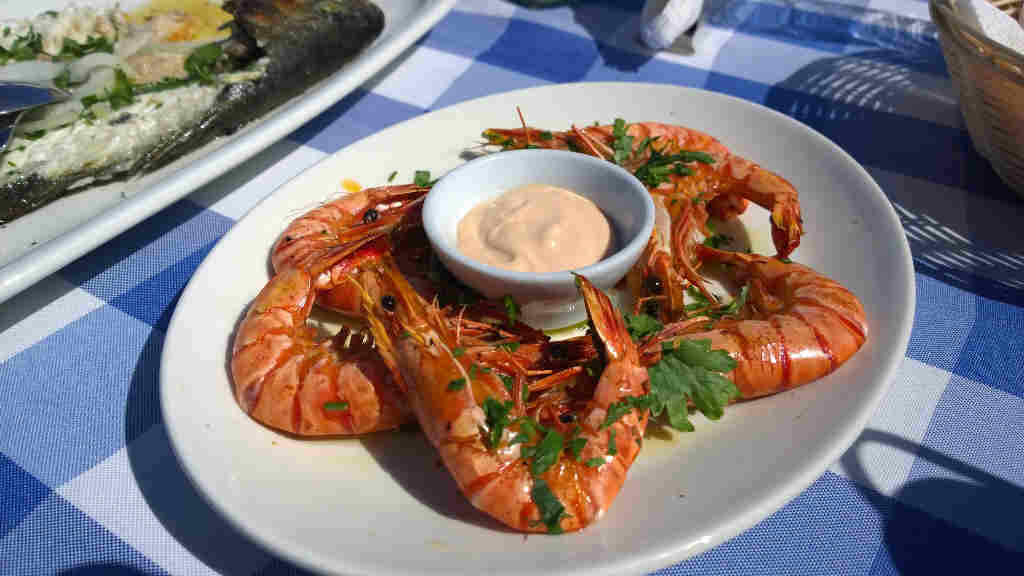 As far as the beaches are concerned, all of them are beautiful and crystal clear. Of course everyone mentions Nissi beach when they go to Ayia Nappa because that’s where all the young people go, but there are a lot of other beautiful beaches there, specially the Limanaki which is larger and as beautiful as Nissi. I spent hours walking on these beaches and never got bored of them. 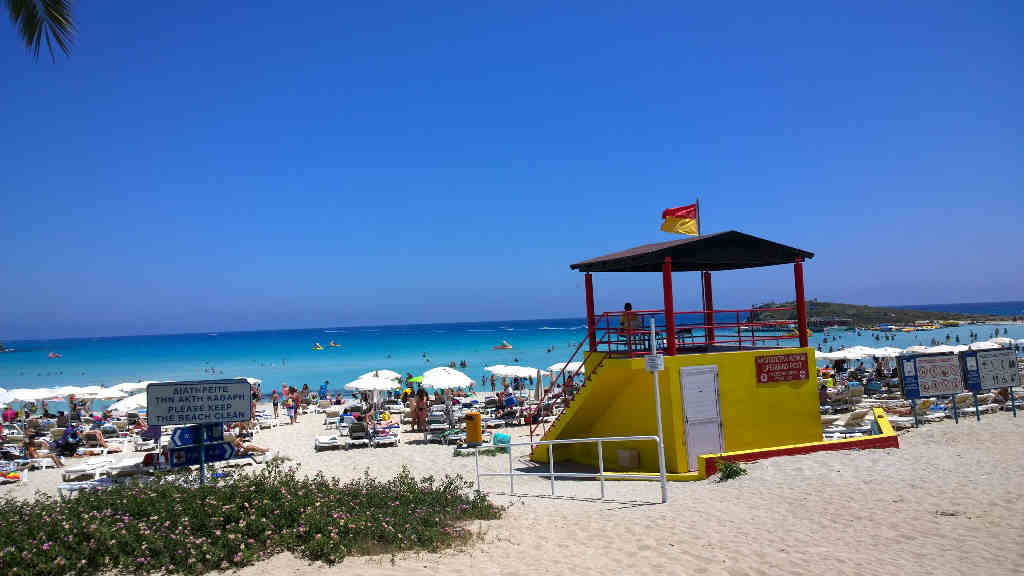 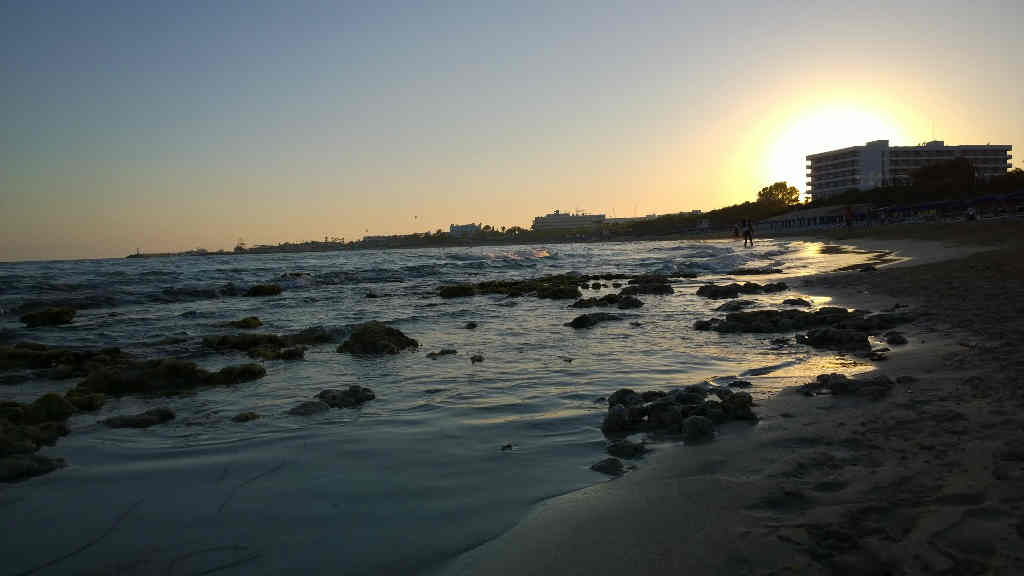 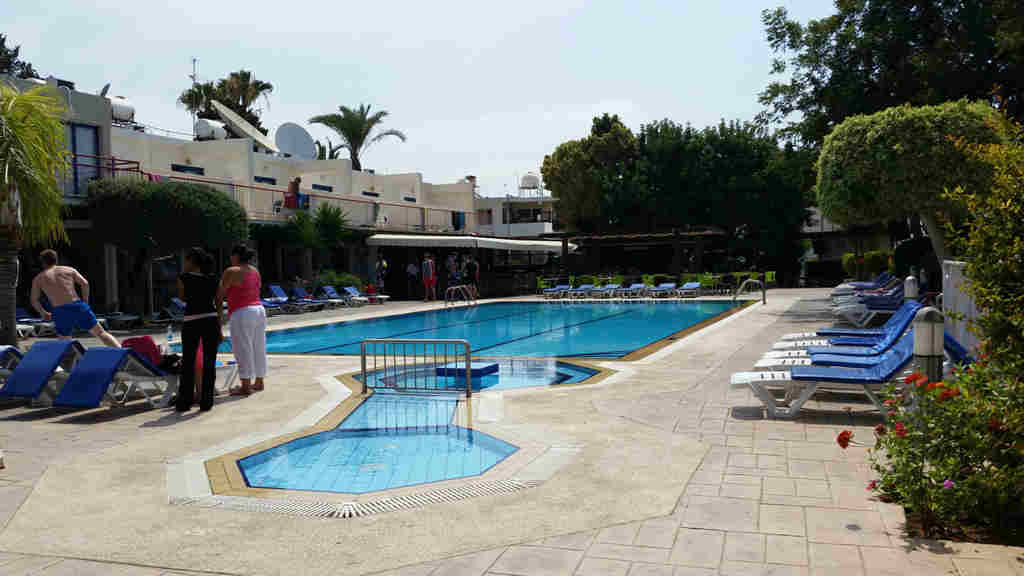 We were a group of 12 guys on a bachelor weekend the second time and we thought it would better to stay close to the street with all the pubs and nights so we rented 4 rooms at the Green Bungalows Hotel Apartments. To be honest, the place is not very clean and the room service is mediocre, but we ended up spending 110 euros for 3 days which is a great price. The best thing about this place is how chilled people are there, and its proximity to all the pubs and nightclubs and the town center. We didn’t need to rent buggies or quads as everything (except for Nissi beach) was within a walking distance. 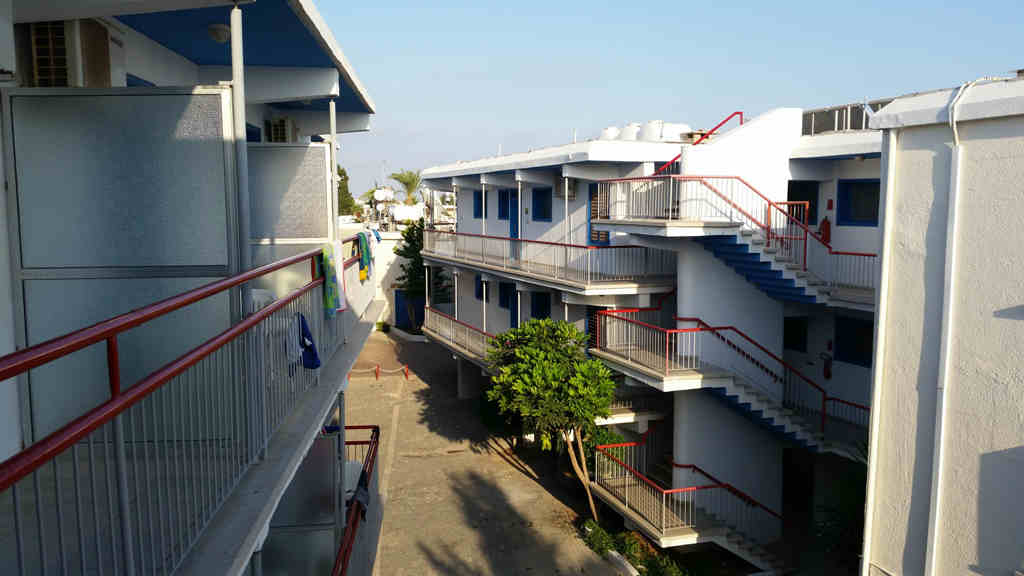 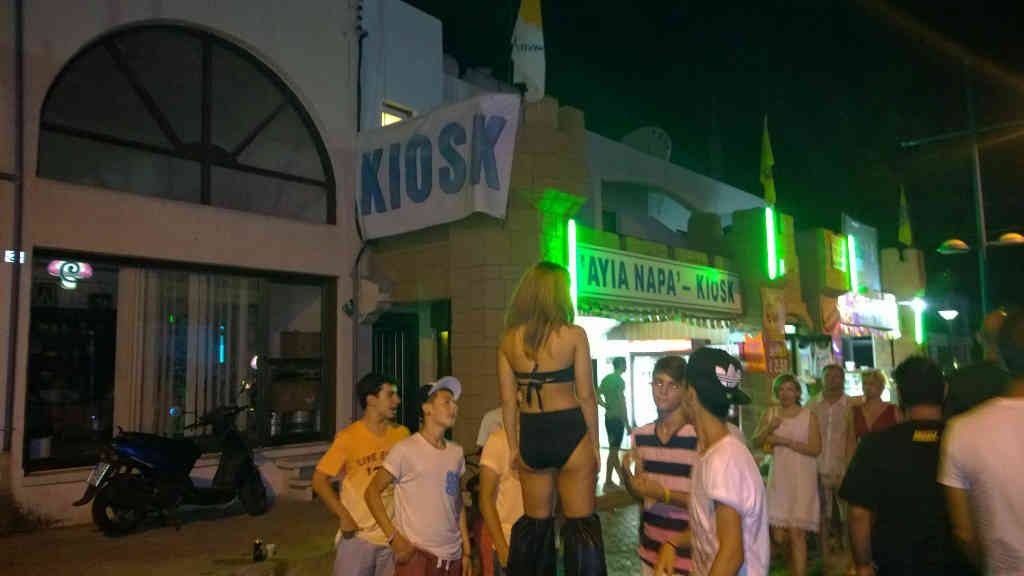 I’ve always heard that Ayia Napa has some of the best night life in Europe and how it’s varied and offers something for everybody but I didn’t find it that spectacular. The reason is that the majority of people we bumped into were teenagers and I felt like I was walking down Monot Street. Of course after few drinks and a couple of laughing gas balloons, nothing really matters but it was quite surprising to see all these groups of kids everywhere around me. 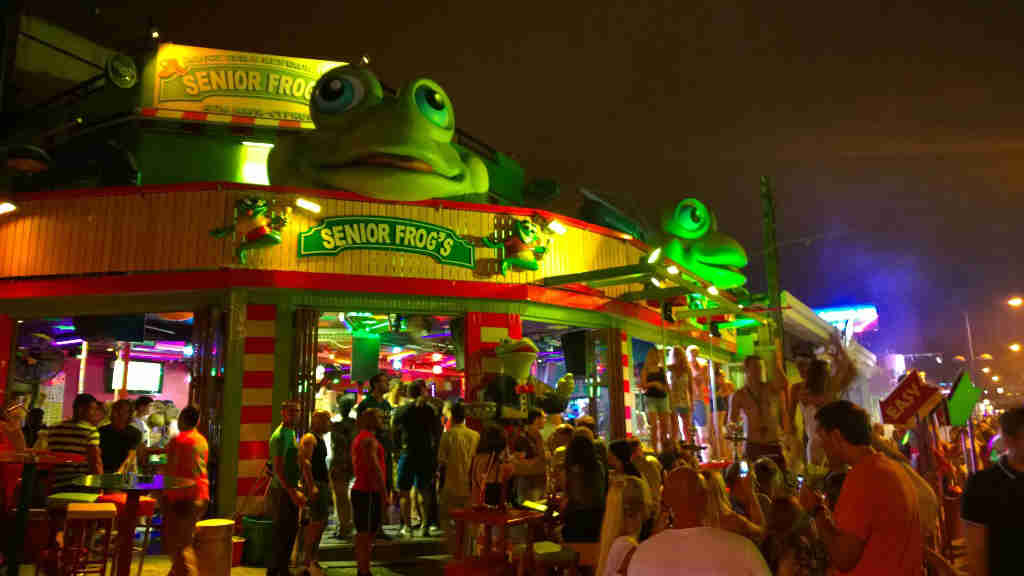 The best place to kick off the night is at Senior Frog’s, as the place is always packed, there’s entertainment and it’s quite a fun ambiance. Afterwards, there’s Castle Club, Bedrock Inn and Soho which are worth a try and River Reggae is one of the best after party night clubs in Ayia Napa. Drinks are not that expensive by the way and few night clubs like Castle Club have entrance fees (10$ If I am not mistaken). 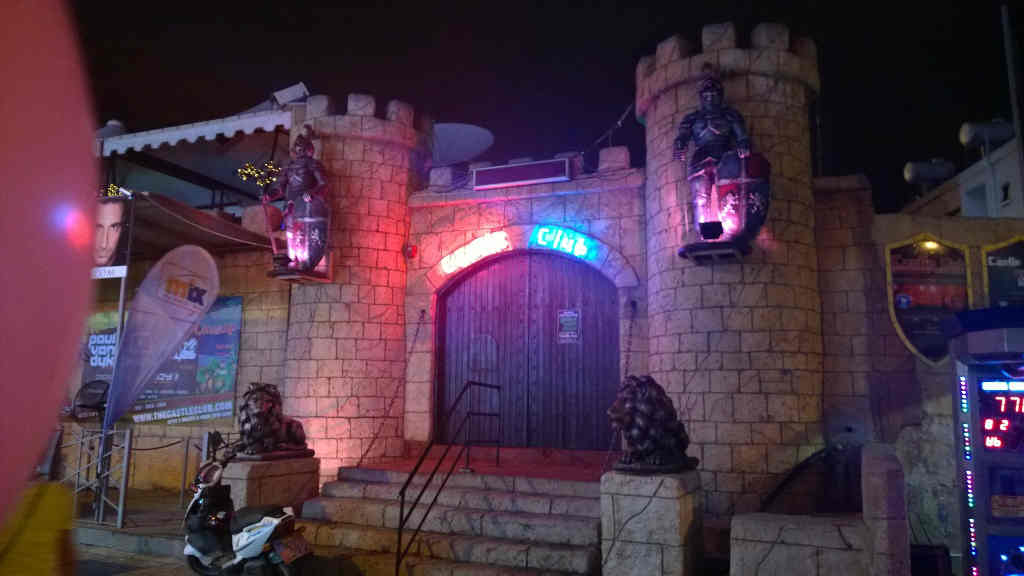 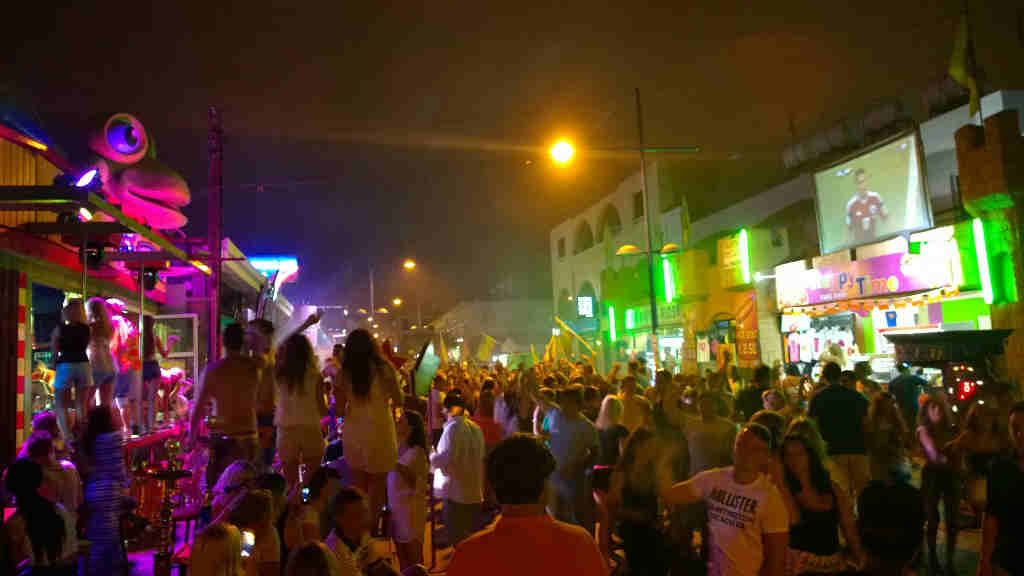 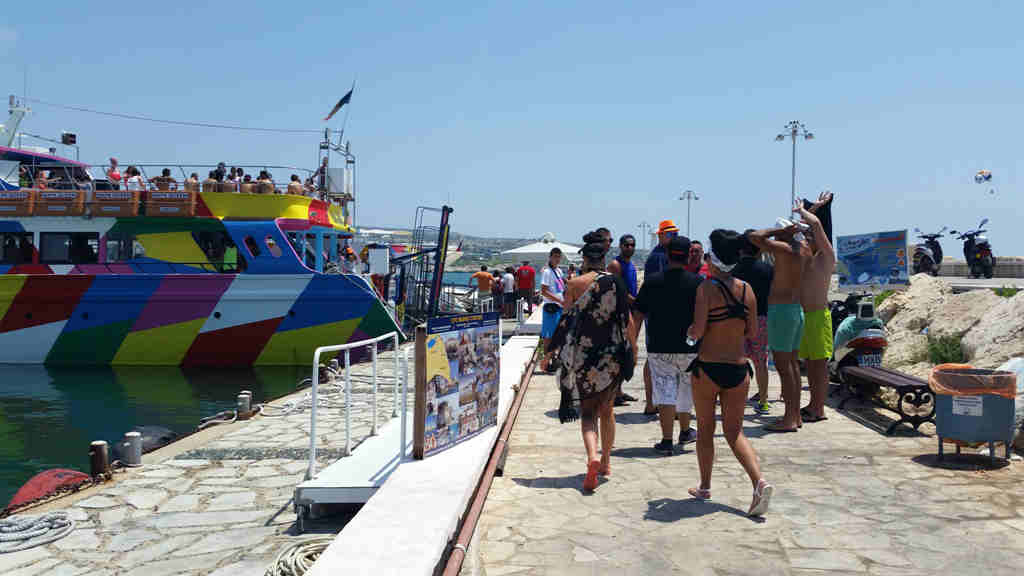 The Fantasy boat party is a fun experience that I recommend you give a try, even though it’s a bit overrated in my opinion. There are small kiosks on the street that sell you tickets to the Fantasy boat party and give you tons of useless coupons with it (just throw them away). The ticket per person varies between 45 and 55 euros and it’s basically a 5 hour boat party where you get to drink, dance, play drinking games, jump off the boat at two specific locations and the girls get a male strip show.

The guy who sells you the tickets assures you that there are as many girls as there are guys but that wasn’t the case at all. 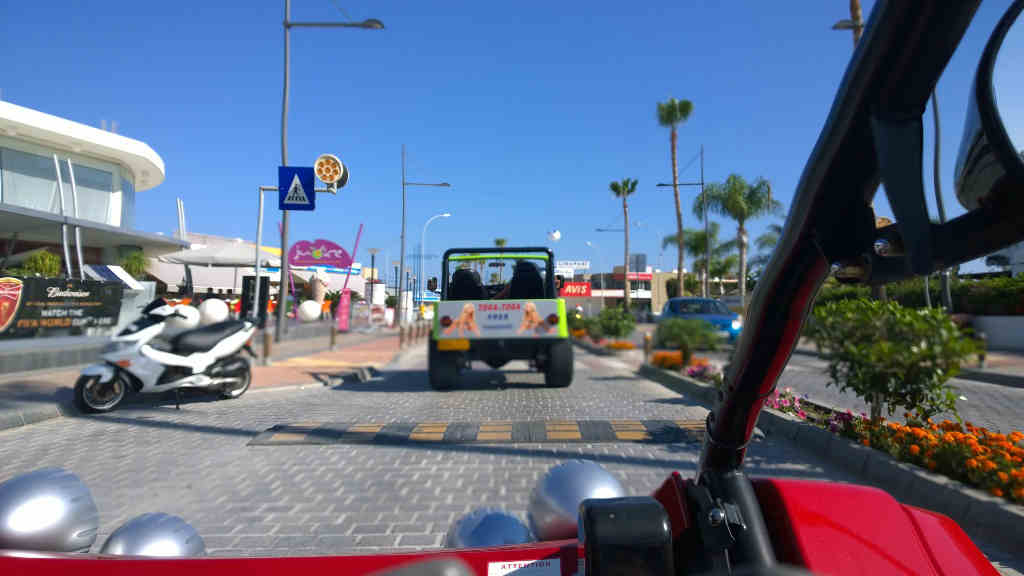 Speaking of strip clubs, you will bump into this small Jeep that offers you free rides to Ayia Napa’s most popular strip club Toga Toga. We honestly didn’t have time to go there as we were always partying till the early morning so I wouldn’t know anything about it. 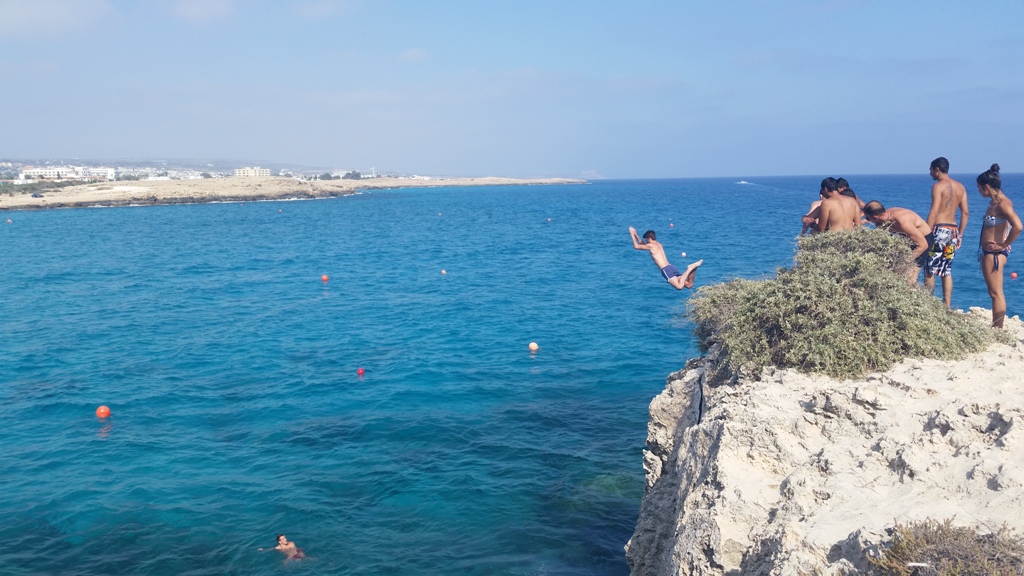 All in all, Ayia Napa beaches are amazing and are the reason why I would visit it again. Moreover, it’s a very close destination (30 minutes flight) and quite affordable when it comes to hotels and restaurants. If you are going alone, try to take the bus from the airport as the taxi costs around 50 euros. There’s a bus from the airport to Larnaka city center and from there to Ayia Napa and you can find further explanations on this [link].