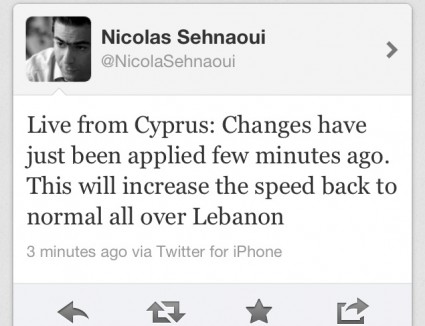 Lebanese Minister of Telecommunications Nicolas Sehnaoui just tweeted from Cyprus that changes were done to restore the connection back to normal in Lebanon. This doesn’t mean that the IMEWE cable malfunction was fixed but that we were able to route our connection through a different line until the problem is solved.

It’s too early to tell but we can only hope it’s true. It’s good to see the parties concerned following up this matter properly, even if we shouldn’t have had an internet outage in the first place.

Update: Mobi is working now but 3G has been disconnecting for the past half hour.

Update2: According to Sehnaoui, Cyprus has agreed to give us 10 Gbps free additional bandwith until our problems are resolved.